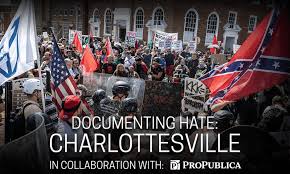 One Year Since Charlottesville and the murder of Heather Heyer— thousands of people drowned out and overwhelmed the handful of neo-Nazi white supremacists who attempted to celebrate the one-year anniversary of their murderous rampage in Charlottesville, Virginia…Much remains to be done! The epidemic of white supremacy—official and “unofficial”—must be stopped. This means Revolution—Nothing Less! This system cannot be reformed, it must be overthrown!

Come watch Documenting Hate: Charlottesville, a film by Frontline/Propublica exposing the white supremacists and neo-Nazis involved in the 2017 Charlottesville Unite the Right rally. Stay for the discussion.