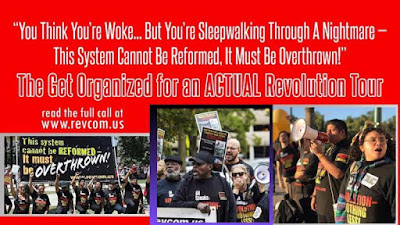 "You Think You're Woke...
But You're Sleepwalking Through A Nightmare --
This System Cannot Be Reformed, It Must Be Overthrown!"

The Get Organized for an ACTUAL Revolution Tour

To you who are fed up with this society and "solutions" that are no solution...

To you who are angry and defiant and want to see an end to the white supremacy, the patriarchy and its many forms of gender oppression, the persecution of immigrants, the imperialist wars and occupations and threats, and the capitalist plunder and destruction of the environment-an end to all, or any, of the horrible forms of oppression and exploitation that define and intertwine with this capitalist-imperialist society..
To you who seek not justice for yourself or even just your own people, but the Emancipation of ALL Humanity...

To you who hate the fascism of Trump and Pence, but see through "vote for me and I'll set you free" and any road that just makes the present horrors a little more tolerable for some within the U.S., while people around the world suffer even more...

To you who choke on "I'm woke," "I'm good," "No worries" when the world is being torn asunder and who have no patience for the putrid morals and relations of this culture...

To each and every person who senses that none of these horrors will be solved by this dog eat dog capitalist/imperialist system and that something radical-a real revolution-is needed... even as you have a thousand questions as to what that revolution would look like and whether it is even possible:

There Is a Way Out of This Madness!

"Let's get down to basics:
We need a revolution. Anything else, in the final analysis, is bullshit."
- Bob Avakian

We are constantly told, openly and by implication, that there is no alternative to the present order. But that is wrong!

There is a scientific approach that makes clear this madness is unnecessary and indicates the potential pathways for change. There is an actual plan for a radically different-and radically better-society, on the road to wiping out all exploitation and oppression, and emancipating humanity. There is a strategy to draw forward the millions and millions needed to make that happen. There is the leadership, in Bob Avakian (BA), the architect of the new communism and the leader of the revolution. These are great strengths on the people's side. But, what is now missing and urgently needed is YOU-to get with, support, and become an organized part of the revolution.

There is a project to put this revolution before millions and organize thousands into it. That project is the Get Organized for an ACTUAL Revolution Tour-starting out in Los Angeles in March and going around the country for the rest of the year. We're going to boldly bring forward that science, strategy, and leadership for revolution and go right up against all the bullshit-the outmoded, petty, self-deceiving, and self-seeking bullshit that just ends up perpetuating the outrages of today.

But that's not all. There's no revolution without organization. We're going to work: organizing for a revolution-enough now of everyone in "their lane," with eyeballs glued to their screens. We're gonna go everywhere, from the hard streets to the suburbs, from the hardscrabble rural areas to the campuses, and to wherever people are creating the new or debating the future. We'll be giving people the concrete ways and means to support, contribute to, and join this revolution, in many different ways, big and small-with ideas and with practical involvement, with support and with questions and criticisms.

The tour will go far and wide, spreading and showing the film of the historic 2018 speech by Bob Avakian, Why We Need An Actual Revolution And How We Can Really Make Revolution, that deeply answers the two questions in its title. And, the tour will get out the pamphlet, HOW WE CAN WIN-How We Can Really Make Revolution, which concisely lays out the principles for how we get from the situation we are in today to actually winning an actual revolution.


Busting the People Out of Mental Shackles

We'll call out the dead-end paths and mental shackles:

* The identity politics and all the similar rationales that end up with people looking out for themselves or their group, while the system grinds on, taking lives and crushing spirits, and dividing those who should oppose it;

* The religions that preach reconciliation and serve to keep minds away from confronting and changing reality as it really is;

* The entrepreneurialism-whether "legit," gangsta, or NGO-style-that keeps everyone locked in the destructive, horrific capitalist present;

* The phony "socialism" that raises people's hopes but only aims at repackaging and dividing up the spoils of U.S. domination of the world.

And we will definitely take on complicity with the Democratic Party, which poses as "the only alternative." When in fact:

The Republican Party Is Fascist
The Democratic Party Is Also a Machine of Massive War Crimes and Crimes Against Humanity
This System CANNOT Be Reformed-It MUST Be Overthrown!
We Need an Actual Revolution

The tour will IMPACT everywhere it goes-opening up debate, stirring up controversy, shaking up society so that people no longer feel they have to accept the unacceptable and adjust to injustice, and instead are inspired to get organized for a revolution to change everything.

The tour will work with the Revolution Clubs where they exist and help form new ones where they don't. The tour will connect with people protesting and resisting this system's crimes, especially those that concentrate the deep conflicts of this system. Stepping to people with revolution straight up, and coming from that place, we'll unite in fighting injustice and oppression, and we'll struggle with them to see the need and possibility for revolution. This is what it means to Fight the Power, and Transform the People, for Revolution.The tour and the Revolution Clubs are where you learn about the revolution while leading-contributing to building vanguard organization necessary to lead a revolution.

The tour kicks off in March in Los Angeles and Southern California. Your participation and your support are needed to start, sustain, popularize, and defend the tour.


What You Can Do NOW

* DONATE: Without hype, absent fundamental change, without revolution, the future of humanity and the planet hangs in the balance. This tour cannot be sustained without your contribution. Become a MONTHLY SUSTAINER and make it possible to keep the tour on the move through the rest of the year. People are pouring their money into politicians of the Democratic Party-who are nothing but war criminals or war criminals-in-training, competing to be commander in chief or representatives of this bloody empire. Make a Profound Difference and DONATE to the possibility of something that could get beyond this horror and radically change the whole world.

* Learn about this tour. Go to www.revcom.us to view the speech by Bob Avakian and to learn more about the tour, the movement for revolution, Bob Avakian, and the new communism.

* Get onboard. Go to revcom.us to see ways you can spread the word, get with the tour, and get organized.


A Radically Different and Better World IS Possible!

Get Organized for an ACTUAL Revolution Tour

For more information and how to donate, go to revcom.us.