How to Make War (Fourth Edition): A Comprehensive Guide to Modern Warfare in the Twenty-first Century (Paperback) 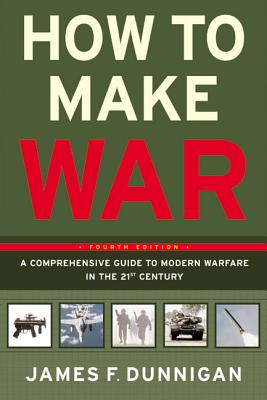 How to Make War (Fourth Edition): A Comprehensive Guide to Modern Warfare in the Twenty-first Century (Paperback)

An indispensable guide to how wars are fought, James F. Dunnigan's classic text has been enormously popular with citizens, professional soldiers, and journalists alike. Now, it's been revised to include a stunning array of new subjects. From the cutting edge of cyberwar to the current concern about terrorism, How to Make War presents a clear picture of complex weapons, armed forces, and tactics.

Describing a new world order, one with a greater number of equipped players than the "Big Two" (the United States and the former Soviet Union), this updated edition features all the elements of traditional warfare, along with a discussion of terrorist techniques; nuclear, chemical, and biological weapons; and Third World ballistic missiles. Past editions of How to Make War were chillingly accurate in assessing and predicting the outcomes of all the major conflicts in the past two decades. Loaded with expertise and the latest information, this edition is an essential reference for any military library –– and a work that forewarns, and forearms, the Free World for the conflicts ahead.

James F. Dunnigan is the author of many books and over a hundred historical simulations. He has been a lecturer to the State Department, the CIA, and the U.S. Army War College. He lives in New York City.