Crimes Against Nature: How George W. Bush and His Corporate Pals Are Plundering the Country and Hijacking Our Democracy (Paperback) 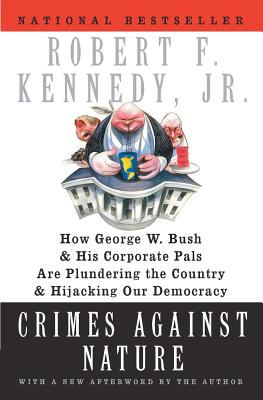 Crimes Against Nature: How George W. Bush and His Corporate Pals Are Plundering the Country and Hijacking Our Democracy (Paperback)

By Robert F. Kennedy, Jr.
List Price: $14.99
Our Price: $13.95
(Save: $1.04 7%)
On Our Shelves Now
Crimes against Nature reveals the hidden history behind three of the nation's first parklands: the Adirondacks, Yellowstone, and the Grand Canyon. Focusing on conservation's impact on local inhabitants, Karl Jacoby traces the effect of criminalizing such traditional practices as hunting, fishing, foraging, and timber cutting in the newly created parks. Jacoby reassesses the nature of these "crimes" and provides a rich portrait of rural people and their relationship with the natural world in the late nineteenth and early twentieth centuries.

Robert F Kennedy, Jr., an environmental attorney and activist, is the president of Waterkeeper Alliance. He is the author of numerous books, including Crimes Against Nature and The Riverkeepers. His writing has appeared in the New York Times, the Atlantic, the Wall Street Journal, and the Washington Post, among other publications.