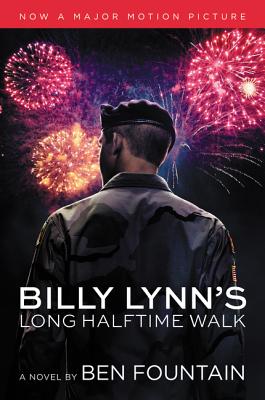 “Fountain has created a sort of inverted Odyssey in which our hero, Billy Lynn, comes home from the Iraq war to find a whole new catalog of trials and challenges awaiting him and the rest of Bravo Company before they are shipped back to the Gulf. Taking place on a single day, at a Thanksgiving football game in Dallas, the novel not only gives us a fresh take on how we view capitalism, materialism, ourselves, our country, and our military, but also provides a wonderfully empathetic tragic-hero in Billy Lynn, at once a brave and fearless fighting machine while still a very innocent and confused young man.”
— Robert Sindelar, Third Place Books, Lake Forest Park, WA

Three minutes and forty-three seconds of intensive warfare with Iraqi insurgents—caught on tape by an embedded Fox News crew—has transformed the eight surviving men of Bravo Squad into America’s most sought-after heroes. Now they’re on a media-intensive nationwide tour to reinvigorate public support for the war. On this rainy Thanksgiving Day, the Bravos are guests of a Dallas football team, slated to be part of the halftime show.

Among the Bravos is nineteen-year-old Specialist Billy Lynn. Surrounded by patriots sporting flag pins on their lapels and support our troops bumper stickers, he is thrust into the company of the team’s owner and his coterie of wealthy colleagues; a born-again cheerleader; a veteran Hollywood producer; and supersized players eager for a vicarious taste of war. Over the course of this day, Billy will drink and brawl, yearn for home and mourn those missing, face a heart-wrenching decision and discover pure love and a bitter wisdom far beyond his years.

Poignant, riotously funny, and exquisitely heartbreaking, Billy Lynn’s Long Halftime Walk is a searing and powerful novel that has cemented Ben Fountain’s reputation as one of the finest writers of his generation.

Ben Fountain was born in Chapel Hill and grew up in the tobacco country of eastern North Carolina. A former practicing attorney, he is the author of Brief Encounters with Che Guevara, which won the PEN/Hemingway Award and the Barnes & Noble Discover Award for Fiction, and the novel Billy Lynn's Long Halftime Walk, winner of the National Book Critics' Circle Award and a finalist for the National Book Award. Billy Lynn was adapted into a feature film directed by three-time Oscar winner Ang Lee, and his work has been translated into over twenty languages. His series of essays published in The Guardian on the 2016 U.S. presidential election was subsequently nominated by the editors of The Guardian for the Pulitzer Prize in Commentary. He lives in Dallas, Texas with his wife of 32 years, Sharon Fountain.

“A masterful echo of ‘Catch-22,’ with war in Iraq at the center. …a gut-punch of a debut novel…There’s hardly a false note, or even a slightly off-pitch one, in Fountain’s sympathetic, damning and structurally ambitious novel.” — Washington Post

“Fountain’s excellent first novel follows a group of soldiers at a Dallas Cowboys game on Thanksgiving Day…Through the eyes of the titular soldier, Fountain creates a minutely observed portrait of a society with woefully misplaced priorities. [Fountain has] a pitch-perfect ear for American talk…” — The New Yorker

“Billy Lynn’s Long Halftime Walk is a big one. This is the brush-clearing Bush book we’ve been waiting for.” — Harper's Magazine

“For Memorial Day why not turn to a biting, thoughtful, and absolutely spot-on new novel, Billy Lynn’s Long Halftime Walk…This postmodern swirl of inner substance, yellow ribbons, and good(ish) intentions is at the core of Ben Fountain’s brilliant Bush-era novel.” — The Daily Beast

“A brilliantly conceived first novel . . . The irony, sorrow, anger and examples of cognitive dissonance that suffuse this novel make it one of the most moving and remarkable novels I’ve ever read.” — Nancy Pearl, NPR, Morning Edition

“Seething, brutally funny…[Fountain] leaves readers with a fully realized band of brothers…Fountain’s readers will never look at an NFL Sunday, or at America, in quite the same way.” — Sports Illustrated

“Biting, thoughtful, and absolutely spot-on. . . . This postmodern swirl of inner substance, yellow ribbons, and good(ish) intentions is at the core of Ben Fountain’s brilliant Bush-era novel.” — The Daily Beast

“The Iraq war hasn’t yet had its Catch-22 or Slaughterhouse-Five, but Billy Lynn’s Long Halftime Walk is a contender… A wicked sense of humor, wonderful writing and, beneath the anger and outrage, a generous heart.” — Tampa Bay Times

“It’s a darkly humorous satire about the war at home, absurd and believable at the same time.” — Esquire

“Darkly comic…Rarely does such a ruminative novel close with such momentum.” — Los Angeles Times

“Fountain’s strength as a writer is that he not only can conjure up this all-too-realistic-sounding mob, but also the young believably innocent soul for our times, Specialist Billy Lynn. And from the first page I found myself rooting for him, often from the edge of my seat.” — Minneapolis Star Tribune

“[A] masterly . . . tightly structured book [with] a sprawling amount of drama and emotion.” — The Rumpus

“[T]he Catch-22 of the Iraq War....Fountain applies the heat of his wicked sense of humor while you face the truth of who we have become. Live one day inside Billy Lynn’s head and you’ll never again see our soldiers or America in the same way.” — Karl Marlantes, bestselling author of Matterhorn

“Ben Fountain stormed to the front lines of American fiction when he published his astonishing...Brief Encounters with Che Guevara. His first novel will raise his stature and add to his splendid reputation. Billy Lynn’s Long Halftime Walk is both hilarious and heartbreaking.” — Pat Conroy

“Fountain is the Pen/Hemingway Award winner of the bristly and satisfying Brief Encounters with Che Guevara, so I expect lots from this book.” — Barbara's Picks, Library Journal

“Ben Fountain’s Halftime is as close to the Great American Novel as anyone is likely to come these days—an extraordinary work that captures and releases the unquiet spirit of our age, and will probably be remembered as one of the important books of this decade.” — Madison Smartt Bell

“While Fountain undoubtedly knows his Graham Greene and Paul Theroux, his excursions into foreign infernos have an innocence all their own. In between his nihilistic descriptions, a boyishness keeps peeking out, cracking one-liners and admiring the amazing if benighted scenery.” — Cleveland Plain Dealer

“So much of Fountain’s work...reads with an easy grace.... [S]ometimes genius is anything but rarefied; sometimes it’s just the thing that emerges after twenty years of working at your kitchen table.” — Malcolm Gladwell, The New Yorker

“Here is a novel that is deeply engaged with our contemporary world, timely and timeless at once. Plus, it’s such fun to read.” — The Millions

“The chasm between the reality and the glorification of war hasn’t been this surreal since Joseph Heller’s Catch-22.” — Sacramento Bee

“…wickedly affecting…Billy Lynn has courted some Catch-22 comparisons, and they’re well-earned. Fountain is a whiz at lining up plausible inanities and gut-twisting truths for the Bravos to suffer through.” — Philadelphia City Paper

“[A] wonderfully readable book [which] does something similar to Why Are We in Vietnam?, asking hard questions about the cultural short-sightedness that contributed to our involvement in Iraq. As a veteran myself, I can attest that it’s spot on.” — BookRiot

“To call Fountain’s work enjoyable would be an understatement because it quite simply is one of the best novels written in the past five years.” — Texas Books in Review

“The best book about the Iraq War and Destiny’s Child that you’ll ever read.” — Entertainment Weekly