Unforgetting: A Memoir of Family, Migration, Gangs, and Revolution in the Americas (Paperback) 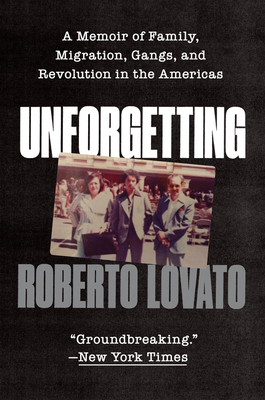 Unforgetting: A Memoir of Family, Migration, Gangs, and Revolution in the Americas (Paperback)

"Gripping and beautiful. With the artistry of a poet and the intensity of a revolutionary, Lovato untangles the tightly knit skein of love and terror that connects El Salvador and the United States."   —Barbara Ehrenreich, author of Natural Causes and Nickel and Dimed

An urgent, no-holds-barred tale of gang life, guerrilla warfare, intergenerational trauma, and interconnected violence between the United States and El Salvador, Roberto Lovato’s memoir excavates family history and reveals the intimate stories beneath headlines about gang violence and mass Central American migration, one of the most important, yet least-understood humanitarian crises of our time—and one in which the perspectives of Central Americans in the United States have been silenced and forgotten.

The child of Salvadoran immigrants, Roberto Lovato grew up in 1970s and 80s San Francisco as MS-13 and other notorious Salvadoran gangs were forming in California. In his teens, he lost friends to the escalating violence, and survived acts of brutality himself. He eventually traded the violence of the streets for human rights advocacy in wartime El Salvador where he joined the guerilla movement against the U.S.-backed, fascist military government responsible for some of the most barbaric massacres and crimes against humanity in recent history.

Roberto returned from war-torn El Salvador to find the United States on the verge of unprecedented crises of its own. There, he channeled his own pain into activism and journalism, focusing his attention on how trauma affects individual lives and societies, and began the difficult journey of confronting the roots of his own trauma. As a child, Roberto endured a tumultuous relationship with his father Ramón. Raised in extreme poverty in the countryside of El Salvador during one of the most violent periods of its history, Ramón learned to survive by straddling intersecting underworlds of family secrets, traumatic silences, and dealing in black-market goods and guns. The repression of the violence in his life took its toll, however. Ramón was plagued with silences and fits of anger that had a profound impact on his youngest son, and which Roberto attributes as a source of constant reckoning with the violence and rebellion in his own life.

In Unforgetting, Roberto interweaves his father’s complicated history and his own with first-hand reportage on gang life, state violence, and the heart of the immigration crisis in both El Salvador and the United States. In doing so he makes the political personal, revealing the cyclical ways violence operates in our homes and our societies, as well as the ways hope and tenderness can rise up out of the darkness if we are courageous enough to unforget.

Roberto Lovato is a journalist and a member of The Writers Grotto. He is one of the country’s leading writers and thinkers on Central American gangs, refugees, violence and other issues. Lovato is also a co-founder of #DignidadLiteraria, the national movement formed to combat the invisibility and silencing of Latinx stories and books in the U.S. publishing industry. He is also recipient of a reporting grant from the Pulitzer Center and a former fellow at U.C. Berkeley’s Latinx Research Center. His essays and reporting have appeared in numerous publications including Guernica, Boston Globe, Foreign Policy, Guardian, Los Angeles Times, Der Spiegel, La Opinion, and other national and international publications. He lives in San Francisco.

“What is Unforgetting—a coming of age story, a thriller, a slice of hemispheric history? All I can say for sure is that it’s both gripping and beautiful. With the artistry of a poet and the intensity of a revolutionary, Lovato untangles the tightly knit skein of love and terror that connects El Salvador and the United States. This book is an eye-opener into a world Anglo-Americans have been taught is enemy territory.” — Barbara Ehrenreich, author of Natural Causes and Nickel and Dimed

“There has never been a book about the Latinx experience quite like Roberto Lovato’s Unforgetting. Here is a voice that is outraged, philosophical, thoughtful, blunt, emotional, and, above all, fiercely independent. In this illuminating and insightful memoir, Lovato journeys into the underworlds of the fraught history of El Salvador, and his own California upbringing, and finds injustice, resistance, and hope.” — Héctor Tobar, author of Deep Down Dark and The Tattooed Soldier

“Groundbreaking…. A kaleidoscopic montage that is at once a family saga, a coming-of-age story and a meditation on the vicissitudes of history, community and, most of all for [Lovato], identity.” — Carolyn Forché, New York Times

“Journalist Lovato’s raw memoir moves from his youth in 1970s California to his time in war-torn El Salvador. He writes unflinchingly about extreme poverty and the trauma of violence and war in a way that is at once extremely personal, expansive and timely.” — Newsweek

“Electrifying. . . . Throughout this panoptic personal narrative, Lovato aims to reframe Salvadoran American identity itself. And at a crucial national moment, he also reminds us that diaspora Latin Americans in the United States . . . share a collective experience marked by historical trauma but also enormous wells of resilience.” — Daniel Hernandez, Los Angeles Times

“Lovato… a preeminent voice on Central America’s tribulations… shows how reportage that is rooted in personal biography and inner turmoil can unveil a more powerful kind of truth.” — New Republic

“With the precision of a master seamstress… Lovato braids a narrative that spans nine decades and weaves together El Salvador’s history of genocide, civil war, revolution and migration with his family’s own…. Lovato’s book is a brave examination of the oft-erased history of Salvadorans.” — San Francisco Chronicle

“For generations, from McKinley to Trump, the United States has cast a shadow of exploitation and counter-revolution over Central America.  In this stunning tale of love and horror, the journalist Roberto Lovato recounts how his own family history, from the indentured Salvadoran countryside to the burning streets of Los Angeles, has been shaped by resistance to yanqui violence.” — Mike Davis, author of City of Quartz and Set the Night on Fire

“‘Unforgetting’ explores the traumatic history of a country torn apart by wars and gangs—and the dangers of not facing the past…. The title of Lovato’s book: “Unforgetting” is both a salve and a way of exposing the truth…. Lovato’s writing about memory and reconciliation speaks powerfully to [the] truth… that terror is never a given but rather a consequence of how power is wielded in history.” — New Republic

“In a memoir that is at once profoundly personal and historically significant, accomplished journalist and scholar Lovato… relates gripping true stories populated by heroic, doomed, resilient, and unforgettable characters who shine in their humanity, hope, and endurance. This mix of memoir and history is an essential chronicle, solidly researched and carefully sourced, and enriched with some poetry and plenty of hard-won wisdom.” — Booklist, starred review

“A provocative, revealing work of journalism that explains gang behavior but does not idealize it.” — Kirkus

"Unforgetting is unforgettable. It teaches an essential history which all of us desperately need in order to understand the society in which we live. A finely woven tapestry of inheritance, culture and love, this story of Latinidad in the United States is specifically Salvadoreño yet sits in a breathtaking archipelago of communities and histories on and across borders. With marvelous, intimate storytelling Lovato's coming of age story displaces ugly myths about Central America and its gangs with the truth of what made America, beginning with the ongoing violence of conquest and culminating with the gorgeous repetition of freedom dreams." — Imani Perry, Hughes-Rogers Professor of African American Studies at Princeton University and author of Looking for Lorraine and Breathe: A Letter to My Sons

“Salvadorans are ‘a people in the constant motion of overcoming,’ Roberto Lovato writes in his pivotal debut Unforgetting. In it, he runs a machete through himself and his family’s history—the 1932 Matanza, the 1980s civil war, and our present-day struggles with gang-violence and migration. With raw honesty, Lovato partakes in a much-needed excavation of what it means to be ‘Salvadoran’—and ‘American’—in this world. Unforgetting is an opening, a tear in the cloth, we Salvadorans must speak through.” — Javier Zamora, author of Unaccompanied