Haroun and the Sea of Stories (Paperback) 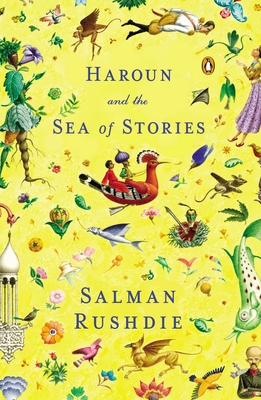 Haroun and the Sea of Stories (Paperback)


On Our Shelves Now
A captivating fantasy novel for readers of all ages, by the author of Midnight’s Children and The Satanic Verses

“This is, simply put, a book for anyone who loves a good story. It’s also a work of literary genius.” —Stephen King

Set in an exotic Eastern landscape peopled by magicians and fantastic talking animals, Haroun and the Sea of Stories inhabits the same imaginative space as The Lord of the Rings, The Alchemist, The Arabian Nights, and The Wizard of Oz. Twelve-year-old Haroun sets out on an adventure to restore his father’s gift of storytelling by reviving the poisoned Sea of Stories. On the way, he encounters many foes, all intent on draining the sea of all its storytelling powers.

In this wondrously delightful story, Salman Rushdie gives us an imaginative work of extraordinary power and endearing humor that is, at its heart, an illumination of the necessity of storytelling in our lives.
Born in Bombay in 1947, Salman Rushdie is the author of six novels, including Grimus, Shame, The Satanic Verses, The Moor's Last Sigh, and The Ground Beneath Her Feet, and a volume of essays, Imaginary Homelands. His numerous literary prizes include the Booker Prize for Midnight's Children and the Whitbread Prize for The Satanic Verses.
“A performance that dazzles the eye as it erupts triumphantly out of the dark in a display of fireworks.”
—Anita Desai, The Washington Post Book World

“A lively, wonderfully inventive comic tale . . . His own Sea of Stories from which he drew this entertaining and moving book continues to flow as clear and brilliant as ever.”
—Alison Lurie, The New York Times Book Review

“Wonderful . . . A novel of tremendous charm . . . A tribute to the pleasures, and terrible powers of storytelling . . . As lively and impassioned as any of his previous novels, but this time full of love.” —Newsweek

“Fantasy, adventure, and allegory in a beautiful mix . . . Salman Rushdie reappears enriched as a human being and as a writer.”
—Mario Vargas Llosa

“Eloquent and rejuvenative . . . A testament to the magic and power of a child’s belief, and to Rushdie’s undaunted optimism for the future.”
—Newsday

“Rushdie’s gifts include wit and wildness in a sharp engagement with the world’s complexities.”
—Los Angeles Times

“Rushdie is a master of brilliant, seductive language. . . . He transforms his story into the lush, arcane fabric of myth. It is a tale of high adventure, deep sadness, and miraculous recovery—a landmark work from one of today’s most important writers.”
—Self

“Like all good fables and fairy tales, Haroun and the Sea of Stories yields its riches on many levels. Readers will relish the wordplay and multilingual punning.”
—Boston Sunday Herald

“Haroun and the Sea of Stories is a wonderful novel, timeless in the way fine literature is always timeless.”
—Stephen King

“I enjoyed this adventure story. . . . It involves you at once and keeps you reading, and so it should, for it’s from the same magic land as Sinbad, The Thousand and One Nights, The Golden Fleece.”
—Doris Lessing

“Full of light and magic . . . A testimony to creativity, and to the gentle strength of hope.”
—The Boston Sunday Globe