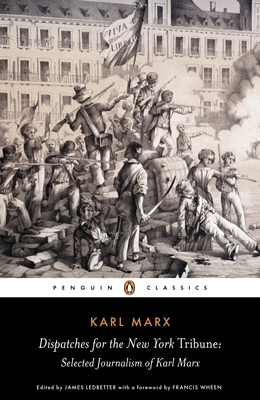 
On Our Shelves Now
Karl Marx (1818-1883) is arguably the most famous political philosopher of all time, but he was also one of the great foreign correspondents of the nineteenth century. During his eleven years writing for the New York Tribune (their collaboration began in 1852), Marx tackled an abundance of topics, from issues of class and the state to world affairs. Particularly moving pieces highlight social inequality and starvation in Britain, while others explore his groundbreaking views on the slave and opium trades - Marx believed Western powers relied on these and would stop at nothing to protect their interests. Above all, Marx’s fresh perspective on nineteenth-century events encouraged his readers to think, and his writing is surprisingly relevant today.

For more than seventy years, Penguin has been the leading publisher of classic literature in the English-speaking world. With more than 1,700 titles, Penguin Classics represents a global bookshelf of the best works throughout history and across genres and disciplines. Readers trust the series to provide authoritative texts enhanced by introductions and notes by distinguished scholars and contemporary authors, as well as up-to-date translations by award-winning translators.
Karl Marx was born in 1818 in Trier, Germany and studied in Bonn and Berlin. Influenced by Hegel, he later reacted against idealist philosophy and began to develop his own theory of historical materialism. He related the state of society to its economic foundations and mode of production, and recommended armed revolution on the part of the proletariat. Together with Engels, who he met in Paris, he wrote the Manifesto of the Communist Party. He lived in England as a refugee until his death in 1888, after participating in an unsuccessful revolution in Germany. Ernst Mandel was a member of the Belgian TUV from 1954 to 1963 and was chosen for the annual Alfred Marshall Lectures by Cambridge University in 1978. He died in 1995 and the Guardian described him as 'one of the most creative and independent-minded revolutionary Marxist thinkers of the post-war world.'