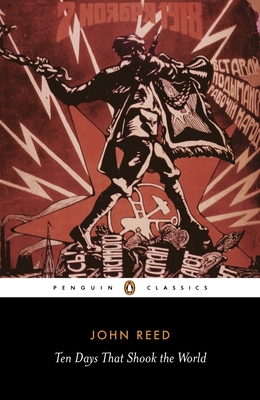 
On Our Shelves Now
An impassioned firsthand account of the Russian Revolution, which celebrates its 100th anniversary in March 2017

An American journalist and revolutionary writer, John Reed became a close friend of Lenin and was an eyewitness to the 1917 revolution in Russia. Ten Days That Shook the World is Reed's extraordinary record of that event. Writing in the first flush of revolutionary enthusiasm, he gives a gripping account of the events in Petrograd in November 1917, when Lenin and the Bolsheviks finally seized power. Containing verbatim reports both of speeches by leaders and of the chance comments of bystanders, and set against an idealized backdrop of soldiers, sailors, peasants, and the proletariat uniting to throw off oppression, Reed's account is the product of passionate involvement and remains an unsurpassed classic of reporting.

For more than seventy years, Penguin has been the leading publisher of classic literature in the English-speaking world. With more than 1,700 titles, Penguin Classics represents a global bookshelf of the best works throughout history and across genres and disciplines. Readers trust the series to provide authoritative texts enhanced by introductions and notes by distinguished scholars and contemporary authors, as well as up-to-date translations by award-winning translators.
John Reed (1887-1920) American journalist and poet-adventurer whose colourful life as a revolutionary writer ended in Russia but made him the hero of a generation of radical intellectuals. Reed became a close friend of V. I. Lenin and was an eyewitness to the 1917 October revolution. He recorded this historical event in his best-known book Ten Days That Shook the World (1920). Reed is buried with other Bolshevik heroes beside the Kremlin wall.

Vladimir Lenin was born in 1870 and was one of the most influential figures of the 20th century. He became a revolutionary, a communist politician, the principal leader of the October Revolution, the first head of the Russian Soviet Socialist Republic and, from 1922, the first de facto leader of the Soviet Union. He wrote Imperialism: The Highest Stage of Capitalism while in exile in Switzerland during the First World War.