The Underdogs: A Novel of the Mexican Revolution (Paperback) 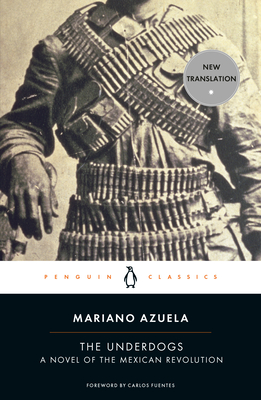 The Underdogs: A Novel of the Mexican Revolution (Paperback)


On Our Shelves Now
The greatest novel of the Mexican Revolution, in a brilliant new translation by an award-winning translator

The Underdogs is the first great novel about the first great revolution of the twentieth century. Demetrio Macias, a poor, illiterate Indian, must join the rebels to save his family. Courageous and charismatic, he earns a generalship in Pancho Villa’s army, only to become discouraged with the cause after it becomes hopelessly factionalized. At once a spare, moving depiction of the limits of political idealism, an authentic representation of Mexico’s peasant life, and a timeless portrait of revolution, The Underdogs is an iconic novel of the Latin American experience and a powerful novel about the disillusionment of war.
Mariano Azuela (1873–1952) studied medicine in Guadalajara and served during the revolution as a doctor with the forces of Pancho Villa, which gave him firsthand exposure to the events and characters that appear in The Underdogs.

Sergio Waisman (translator, notes) is the recipient of a National Endowment for the Arts Translation Award and is a professor of Spanish at George Washington University in Washington, D.C.

Carlos Fuentes (1928–2012, foreword) is the author of more than twenty books and the recipient of many awards, including Mexico’s National Prize in Literature, the Cervantes Prize, and the inaugural Latin Civilization Award.
“Mariano Azuela, more than any other novelist of the Mexican Revolution, lifts the heavy stone of history to see what there is underneath it.” —Carlos Fuentes, from the Foreword

“This is not only a novel of the Mexican Revolution, but also of our own contemporary madness, and Sergio Waisman’s translation captures its full force and fervor.” —Sandra Cisneros

“An essential book for Mexico, about the first revolution of the twentieth century. Mariano Azuela’s pen is a warm gun, and Sergio Waisman’s translation, introduction, and notes are as vivid, well aimed, and sharp as the gunshots in the battle.” —Elena Poniatowska