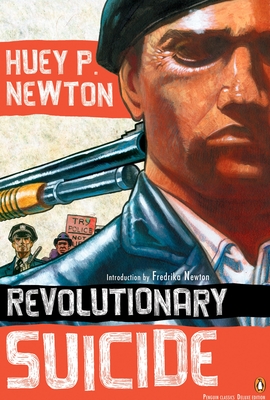 
On Our Shelves Now
The searing, visionary memoir of founding Black Panther Huey P. Newton, in a dazzling graphic package

Tracing the birth of a revolutionary, Huey P. Newton's famous and oft-quoted autobiography is as much a manifesto as a portrait of the inner circle of America's Black Panther Party. From Newton's impoverished childhood on the streets of Oakland to his adolescence and struggles with the system, from his role in the Black Panthers to his solitary confinement in the Alameda County Jail, Revolutionary Suicide is unrepentant and thought-provoking in its portrayal of inspired radicalism.

For more than seventy years, Penguin has been the leading publisher of classic literature in the English-speaking world. With more than 1,700 titles, Penguin Classics represents a global bookshelf of the best works throughout history and across genres and disciplines. Readers trust the series to provide authoritative texts enhanced by introductions and notes by distinguished scholars and contemporary authors, as well as up-to-date translations by award-winning translators.
Born the son of a Baptist minister in 1942 in Monroe, Louisiana, Huey P. Newton moved to Oakland, California, with his family at the age of three. Although functionally illiterate upon graduating from high school, he taught himself to read by studying Plato’s Republic. Newton enrolled at Oakland City College, where he campaigned successfully to have black history included in the curriculum. While at the college, he became familiar with the writings of Marx, Lenin, Frantz Fanon, and Chairman Mao. In 1966, with Bobby Seale, Newton co-founded the Black Panther Party for Self-Defense, an organization in which Newton served as minister of defense. Though perhaps best known for their community street patrols, which openly displayed loaded firearms, the Black Panthers also sponsored breakfast programs for poor children and provided shoes and health care for the needy in the black community. Convicted in 1968 of manslaughter in the shooting death of Oakland police officer John Frey in 1968, Newton spent more than a year and a half in prison before his conviction was reversed. After a series of mistrials, the case against Newton was voluntarily dismissed. After reaching its high-water mark in 1970, when it claimed several thousand members, the Black Panther Party steadily declined, undermined in part by the efforts of the FBI. Accused of another murder in 1974, Newton jumped bail and spent the next three years in Cuba, after which he returned to the United States to stand trial and was acquitted of the charge. Newton earned a doctorate from the University of California, Santa Cruz, in 1980. He was shot to death by a gang member in 1989.