END_OF_DOCUMENT_TOKEN_TO_BE_REPLACED

The Punishment of Virtue: Inside Afghanistan After the Taliban (Paperback) 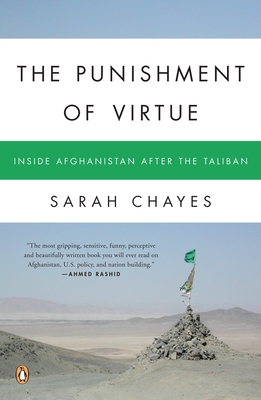 As a former star reporter for NPR, Sarah Chayes developed a devoted listenership for her on-site reports on conflicts around the world. In The Punishment of Virtue, she reveals the misguided U.S. policy in Afghanistan in the wake of the defeat of the Taliban, which has severely undermined the effort to build democracy and allowed corrupt tribal warlords back into positions of power and the Taliban to re-infiltrate the country. This is an eyeopening chronicle that highlights the often infuriating realities of a vital front in the war on terror, exposing deeper, fundamental problems with current U.S. strategy.

From 1997 to 2002, Sarah Chayes served as an overseas correspondent for NPR, reporting from Paris and the Balkans, as well as covering conflicts in Algeria. When war broke out in Afghanistan in 2001, NPR sent her to report from Quetta, Pakistan, and then from inside Afghanistan, based in the southern city of Kandahar, as the Taliban fell. In 2002, she left NPR to take a position running a nongovernmental aid organization, Afghans for Civil Society, founded by Qayum Karzai. Now she has launched her own artisanal agribusiness, called Arghand. Her work as a correspondent for NPR during the Kosovo crisis earned her, together with other members of the NPR team, the 1999 Foreign Press Club and Sigma Delta Chi awards.