Too Big to Fail: The Inside Story of How Wall Street and Washington Fought to Save the Financial System--and Themselves (Paperback) 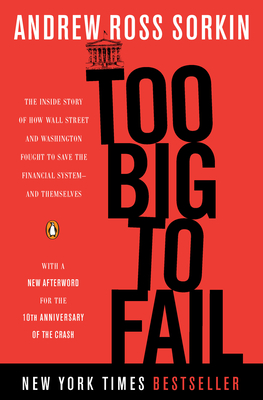 Too Big to Fail: The Inside Story of How Wall Street and Washington Fought to Save the Financial System--and Themselves (Paperback)


On Our Shelves Now
Brand New for 2018: an updated edition featuring a new afterword to mark the 10th anniversary of the financial crisis

The brilliantly reported New York Times bestseller that goes behind the scenes of the financial crisis on Wall Street and in Washington to give the definitive account of the crisis, the basis for the HBO film

“Too Big To Fail is too good to put down. . . . It is the story of the actors in the most extraordinary financial spectacle in 80 years, and it is told brilliantly.” —The Economist

In one of the most gripping financial narratives in decades, Andrew Ross Sorkin—a New York Times columnist and one of the country's most respected financial reporters—delivers the first definitive blow-by-blow account of the epochal economic crisis that brought the world to the brink. Through unprecedented access to the players involved, he re-creates all the drama and turmoil of these turbulent days, revealing never-before-disclosed details and recounting how, motivated as often by ego and greed as by fear and self-preservation, the most powerful men and women in finance and politics decided the fate of the world's economy.
Andrew Ross Sorkin is the award-winning chief mergers and acquisitions reporter for The New York Times, a columnist, and assistant editor of business and finance news. He is also the editor and founder of DealBook, an online daily financial report. He has won a Gerald Loeb Award, the highest honor in business journalism, and a Society of American Business Editors and Writers Award. In 2007, the World Economic Forum named him a Young Global Leader.
“Comprehensive and chilling.”
—Time

“. . . His action scenes are intimate and engaging.”
—The New Yorker

“Sorkin’s prodigious reporting and lively writing put the reader in the room for some of the biggest-dollar conference calls in history. It’s an entertaining book, brisk book . . . Sorkin skillfully captures the raucous enthusiasm and riotous greed that fueled this rational irrationality.”
—The New York Times Book Review

“Brings the drama alive with unusual inside access and compelling detail . . . A deeply researched account of the financial meltdown."
—BusinessWeek

“Meticulously researched . . . told brilliantly. Other blow-by-blow accounts are in the works. It is hard to imagine them being this riveting.”
—The Economist

“Sorkin’s densely detailed and astonishing narrative of the epic financial crisis of 2008 is an extraordinary achievement that will be hard to surpass as the definitive account . . . as a dramatic close-up, his book is hard to beat.”
—Financial Times

“Sorkin’s book, like its author, is a phenom . . . an absolute tour de force.”
—The American Prospect

“Andrew Ross Sorkin pens what may be the definitive history of the banking crisis.”
—The Atlantic Monthly

“Andrew Ross Sorkin has written a fascinating, scene-by-scene saga of the eyeless trying to march the clueless through Great Depression II.”
—Tom Wolfe

“Sorkin has succeeded in writing the book of the crisis, with amazing levels of detail and access.”
—Reuters