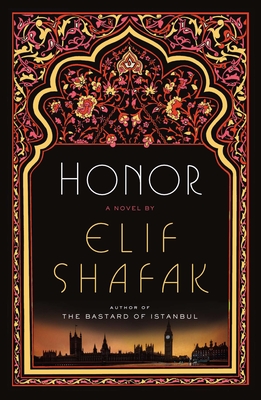 By Elif Shafak
List Price: $19.00
Our Price: $16.00
(Save: $3.00 16%)
On Our Shelves Now
A nuanced, powerful, and psychologically complex novel about the practice of honor killings, from the author of The Island of Missing Trees (a Reese's Book Club pick)

Turkey’s leading female writer, Elif Shafak has won international acclaim for her lyrical blend of Eastern and Western storytelling styles. In this heartbreaking tale of love and misunderstanding, Shafak draws upon the dazzling insight, emotion, and drama that infused The Bastard of Istanbul to explore the controversial issue of honor killings as it tragically plays out in one family’s life.

Twin sisters are born in the mid-1940s in a small Kurdish village on the border of Turkey and Syria. Jamila becomes a local midwife. Pembe marries Adem, and they immigrate to London in the 1970s. Bitter and frustrated with his new life, Adem moves out and Iskender, their eldest son, must step in as keeper of the family’s honor. But when Pembe begins to spend time with another man, Iskender will discover that you could love someone with all your heart and yet still hurt them.

Elif Shafak is an award-winning British-Turkish novelist and a champion of women’s rights and freedom of expression. Her books have been translated into fifty-five languages. Her novels include The Bastard of Istanbul, The Forty Rules of Love, The Architect’s Apprentice, Three Daughters of Eve, 10 Minutes 38 Seconds in This Strange World, which was a finalist for the 2019 Booker Prize, and, most recently, The Island of Missing Trees, which is a November 2021 Reese Witherspoon Book Club Pick. She is also the author of a memoir, Black Milk: On the Conflicting Demands of Writing, Creativity, and Motherhood. An active political commentator, columnist, and public speaker, she lives in London. Her website is elifshafak.com.

“Rich and wide as the Euphrates river along whose banks it begins and ends, Elif Shafak has woven with masterful care and compassion one immigrant family's heartbreaking story - a story nurtured in the terrible silences between men and women trying to grow within ancient ways, all the while growing past them. I loved this book.” —Sarah Blake, author of The Postmistress

“Calls to mind The Color Purple in its fierceness of its engagement with male violence and its determination to see its characters to a better place. But Shafak is closer to Isabel Allende in spirit, confidence, and charm. Her portrayal of Muslim cultures, both traditional and globalizing, is as hopeful as it is politically sophisticated.” —The Guardian

“Shafak is an unflinching writer…this is vivid storytelling…a gripping exploration of the darkest aspects of faith and love.”  —The Telegraph

“This is an extraordinarily skillfully crafted and ambitious narrative, with Shakespearian twists and turns, omens and enigmas, prophecies and destinies fulfilled …Shafak joins writers such as Hanif Kureishi, Zadie Smith, Monica Ali…who offer us fictional glimpses of London’s Others.”  —The Independent

“[A] stunning novel…exotic, evocative and utterly gripping.” —The Times