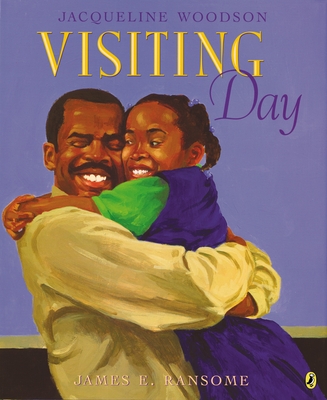 
On Our Shelves Now
In this moving picture book from multi-award winning author Jacqueline Woodson, a young girl and her grandmother prepare for a very special day--the one day a month they get to visit the girl's father in prison. "Only on visiting day is there chicken frying in the kitchen at 6 a.m, and Grandma in her Sunday dress, humming soft and low." As the little girl and her grandmother get ready, her father, who adores her, is getting ready, too, and readers get to join the community of families who make the trip together, as well as the triumphant reunion between father and child, all told in Woodson's trademark lyrical style, and beautifully illusrtrated by James Ransome.
Jacqueline Woodson (www.jacquelinewoodson.com) is the recipient of a 2020 MacArthur Fellowship, the 2020 Hans Christian Andersen Award, the 2018 Astrid Lindgren Memorial Award, and the 2018 Children’s Literature Legacy Award. She was the 2018–2019 National Ambassador for Young People’s Literature, and in 2015, she was named the Young People’s Poet Laureate by the Poetry Foundation. She received the 2014 National Book Award for her New York Times bestselling memoir Brown Girl Dreaming, which was also a recipient of the Coretta Scott King Award, a Newbery Honor, the NAACP Image Award, and a Sibert Honor. She wrote the adult books Red at the Bone, a New York Times bestseller, and Another Brooklyn, a 2016 National Book Award finalist. Born in Columbus, Ohio, Jacqueline grew up in Greenville, South Carolina, and Brooklyn, New York, and graduated from college with a B.A. in English. She is the author of dozens of award-winning books for young adults, middle graders, and children; among her many accolades, she is a four-time Newbery Honor winner, a four-time National Book Award finalist, and a three-time Coretta Scott King Award winner. Her books include Coretta Scott King Award winner Before the Ever After; New York Times bestsellers The Day You Begin and Harbor Me; The Other Side, Each Kindness, Caldecott Honor book Coming On Home Soon; Newbery Honor winners Feathers, Show Way, and After Tupac and D Foster; and Miracle's Boys, which received the LA Times Book Prize and the Coretta Scott King Award. Jacqueline is also a recipient of the Margaret A. Edwards Award for lifetime achievement for her contributions to young adult literature and a two-time winner of the Jane Addams Children's Book Award. She lives with her family in Brooklyn, New York.

James Ransome (www.jamesransome.com) has illustrated more than fifty books for children, including This Is the Rope (by Jacqueline Woodson), and won the Coretta Scott King Award for The Creation (by James Weldon Johnson). His work has also earned him a Coretta Scott King Honor, IBBY Honour, ALA Notable, NAACP Image Award, Bank Street Best Book of the Year, and Rip Van Winkle Award. He lives in upstate New York with his wife, author Lesa Cline-Ransome, and their family.
"This poignant picture book chronicles a joyfil girl narrator's hard-to-bear anticipation and special preparations for a journey with her grandmother to see her father.. . A shared feeling of hope and tenderness pervades each spread."--Publishers Weekly

"Woodson stays firmly planted in the perspective of a sentient young child who is comforted by the familiarity of her world."--Children's Literature

"The text is spare, gentle, and reassuring."--School Library Journal