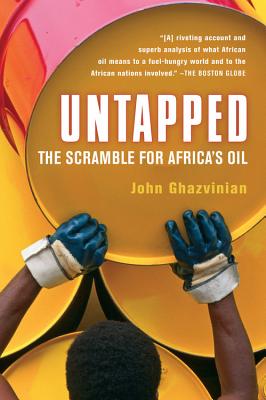 Although Africa has long been known to be rich in oil, extracting it hadn’t seemed worth the effort and risk until recently. But with the price of Middle Eastern crude oil skyrocketing and advancing technology making reserves easier to tap, the region has become the scene of a competition between major powers that recalls the nineteenth-century scramble for colonization there. But what does this giddy new oil boom mean—for America, for the world, for Africans themselves?John Ghazvinian traveled through twelve African countries—from Sudan to Congo to Angola—talking to warlords, industry executives, bandits, activists, priests, missionaries, oil-rig workers, scientists, and ordinary people whose lives have been transformed—not necessarily for the better—by the riches beneath their feet. The result is a high-octane narrative that reveals the challenges, obstacles, reasons for despair, and reasons for hope emerging from one of the world’s energy hot spots.

JOHN GHAZVINIAN has a doctorate in history from Oxford. He has written for Newsweek, the Nation, Time Out New York, and other publications. Born in Iran and raised in London and Los Angeles, he lives in Philadelphia, where he teaches in the Critical Writing Program at the University of Pennsylvania.

PRAISE FOR UNTAPPED “[A] riveting account and superb analysis of what African oil means to a fuel-hungry world and to the African nations involved.”—The Boston Globe  “Perceptive . . . Untapped drills home the point . . . that a thoughtful strategy to lift the neglected bottom billion must compete against the global giants going about their business.”—The New York Times —