Steeped in the Blood of Racism: Black Power, Law and Order, and the 1970 Shootings at Jackson State College (Hardcover) 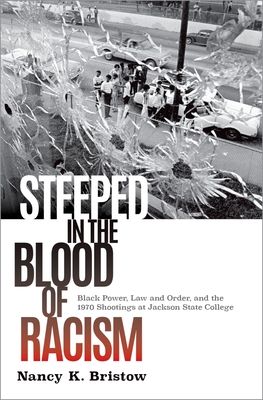 Steeped in the Blood of Racism: Black Power, Law and Order, and the 1970 Shootings at Jackson State College (Hardcover)

By Nancy K. Bristow
List Price: $36.95
Our Price: $34.95
(Save: $2.00 5%)
On Our Shelves Now
Minutes after midnight on May 15, 1970, white members of the Jackson city police and the Mississippi Highway Patrol opened fire on young people in front of a women's dormitory at Jackson State College, a historically black college in Jackson, Mississippi, discharging buckshot, rifle slugs, a
submachine gun, carbines with military ammunition, and two 30.06 rifles loaded with armor-piercing bullets. Twenty-eight seconds later two young people lay dead, another 12 injured. Taking place just ten days after the killings at Kent State, the attack at Jackson State never garnered the same
level of national attention and was chronically misunderstood as similar in cause. This book reclaims this story and situates it in the broader history of the struggle for African American freedom in the civil rights and black power eras. The book explores the essential role of white supremacy in causing the shootings and shaping the aftermath. By 1970, even historically conservative campuses such as Jackson State, where an all-white Board of Trustees of Institutions of Higher Learning had long exercised its power to control student
behavior, were beginning to feel the impact of the movements for African American freedom. Though most of the students at Jackson State remained focused not on activism but their educations, racial consciousness was taking hold. It was this campus police attacked. Acting on racial animus and with
impunity, the shootings reflected both traditional patterns of repression and the new logic and rhetoric of law and order, with its thinly veiled racial coding. In the aftermath, the victims and their survivors struggled unsuccessfully to find justice. Despite multiple investigative commissions, two grand juries and a civil suit brought by students and the families of the dead, the law and order narrative proved too powerful. No officers were charged, no
restitution was paid, and no apologies were offered. The shootings were soon largely forgotten except among the local African American community, the injured victimized once more by historical amnesia born of the unwillingness to acknowledge the essential role of race in causing the violence.

Nancy Bristow is Professor of History at the University of Puget Sound. She is the author of American Pandemic: The Lost Worlds of the 1918 Influenza Epidemic (OUP, 2012) and Making Men Moral: Social Engineering during the Great War.