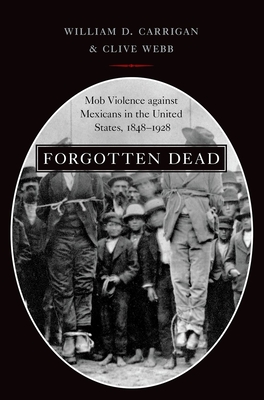 By William D. Carrigan, Clive Webb
List Price: $34.95
Our Price: $25.50
(Save: $9.45 27%)
On Our Shelves Now
Mob violence in the United States is usually associated with the southern lynch mobs who terrorized African Americans during the Jim Crow era. In Forgotten Dead, William D. Carrigan and Clive Webb uncover a comparatively neglected chapter in the story of American racial violence, the lynching of persons of Mexican origin or descent. Over eight decades lynch mobs murdered hundreds of Mexicans, mostly in the American Southwest. Racial prejudice, a lack of respect for local courts, and economic competition all fueled the actions of the mob. Sometimes ordinary citizens committed these acts because of the alleged failure of the criminal justice system; other times the culprits were law enforcement officers themselves. Violence also occurred against the backdrop of continuing tensions along the border between the United States and Mexico aggravated by criminal raids, military escalation, and political revolution. Based on Spanish and English archival documents from both sides of the border, Forgotten Dead explores through detailed case studies the characteristics and causes of mob violence against Mexicans across time and place. It also relates the numerous acts of resistance by Mexicans, including armed self-defense, crusading journalism, and lobbying by diplomats who pressured the United States to honor its rhetorical commitment to democracy. Finally, it contains the first-ever inventory of Mexican victims of mob violence in the United States. Carrigan and Webb assess how Mexican lynching victims came in the minds of many Americans to be the forgotten dead and provide a timely account of Latinos' historical struggle for recognition of civil and human rights.

William D. Carrigan is Professor of History at Rowan University and the author of The Making of a Lynching Culture: Violence and Vigilantism in Central Texas, 1836-1916, the editor of Lynching Reconsidered: New Directions in the Study of Mob Violence, and the co-editor of Swift to Wrath: Lynching in Global Historical Perspective. Clive Webb is Professor of Modern American History at the University of Sussex, the author of Fight against Fear: Southern Jews and Black Civil Rights and Rabble Rousers: The American Far Right in the Civil Rights Era, and the editor of Massive Resistance: Southern Opposition of the Second Reconstruction.