Hannah Mary Tabbs and the Disembodied Torso: A Tale of Race, Sex, and Violence in America (Paperback) 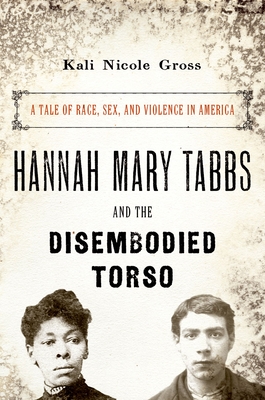 Hannah Mary Tabbs and the Disembodied Torso: A Tale of Race, Sex, and Violence in America (Paperback)


On Our Shelves Now
Shortly after a dismembered torso was discovered by a pond outside Philadelphia in 1887, investigators homed in on two suspects: Hannah Mary Tabbs, a married, working-class, black woman, and George Wilson, a former neighbor whom Tabbs implicated after her arrest. As details surrounding the shocking case emerged, both the crime and ensuing trial--which spanned several months--were featured in the national press. The trial brought otherwise taboo subjects such as illicit sex, adultery, and domestic violence in the black community to public attention. At the
same time, the mixed race of the victim and one of his assailants exacerbated anxieties over the purity of whiteness in the post-Reconstruction era. In Hannah Mary Tabbs and the Disembodied Torso, historian Kali Nicole Gross uses detectives' notes, trial and prison records, local newspapers, and other archival documents to reconstruct this ghastly whodunit crime in all its scandalous detail. In doing so, she gives the crime context by analyzing
it against broader evidence of police treatment of black suspects and violence within the black community. A fascinating work of historical recreation, Hannah Mary Tabbs and the Disembodied Torso is sure to captivate anyone interested in true crime, adulterous love triangles gone wrong, and the racially volatile world of post-Reconstruction Philadelphia.

Kali Nicole Gross is Martin Luther King, Jr. Professor of History at Rutgers University and the author of Colored Amazons: Crime, Violence, and Black Women in the City of Brotherly Love, 1880-1910.