Witness to the Age of Revolution: The Odyssey of Juan Bautista Tupac Amaru (Graphic History) (Paperback) 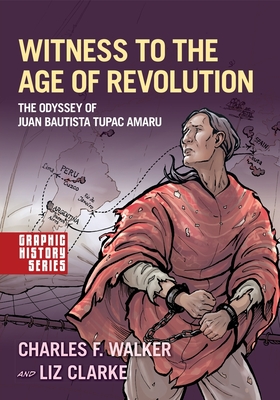 Witness to the Age of Revolution: The Odyssey of Juan Bautista Tupac Amaru (Graphic History) (Paperback)


On Our Shelves Now
The Tupac Amaru rebellion of 1780-1783 began as a local revolt against colonial authorities and grew into the largest rebellion in the history of Spain's American empire-more widespread and deadlier than the American Revolution. An official collector of tribute for the imperial crown, Jos
Gabriel Condorcanqui had seen firsthand what oppressive Spanish rule meant for Peru's Indian population and, under the Inca royal name Tupac Amaru, he set events in motion that would transform him into one of Latin America's most iconic revolutionary figures. While he and the rebellion's leaders
were put to death, his half-brother, Juan Bautista Tupac Amaru, survived but paid a high price for his participation in the uprising. This work in the Graphic History series is based on the memoir written by Juan Bautista about his odyssey as a prisoner of Spain. He endured forty years in jails, dungeons, and presidios on both sides of the Atlantic. Juan Bautista spent two years in jail in Cusco, was freed, rearrested, and then
marched 700 miles in chains over the Andes to Lima. He spent two years aboard a ship travelling around Cape Horn to Spain. Subsequently, he endured over thirty years imprisoned in Ceuta, Spain's much-feared garrison city on the northern tip of Africa. In 1822, priest Marcos Dur n Martel and
Maltese-Argentine naval hero Juan Bautista Azopardo arranged to have him freed and sent to the newly independent Argentina, where he became a symbol of Argentina's short-lived romance with the Incan Empire. There he penned his memoirs, but died without fulfilling his dream of returning to Peru. This stunning graphic history relates the life and legacy of Juan Bautista Tupac Amaru, enhanced by a selection of primary sources, and chronicles the harrowing and extraordinary life of a firsthand witness to the Age of Revolution.
.

Charles F. Walker is Professor of History and the Director of the Hemispheric Institute on the Americas at the University of California, Davis. He is the author of The Tupac Amaru Rebellion, named one of the best books of the year by the Financial Times, among other works on Latin American history. Liz Clarke is a professional illustrator based in Cape Town, South Africa.