An American Odyssey: The Life and Work of Romare Bearden (Hardcover) 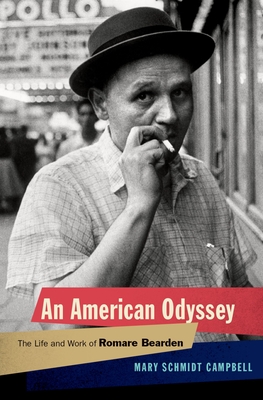 An American Odyssey: The Life and Work of Romare Bearden (Hardcover)


On Our Shelves Now
By the time of his death in 1988, Romare Bearden was most widely celebrated for his large-scale public murals and collages, which were reproduced in such places as Time and Esquire to symbolize and evoke the black experience in America. As Mary Schmidt Campbell shows us in this definitive, defining, and immersive biography, the relationship between art and race was central to his life and work -- a constant, driving creative tension. Bearden started as a cartoonist during his college years, but in the later 1930s turned to painting and became part of a community of artists supported by the WPA. As his reputation grew he perfected his skills, studying the European masters and analyzing and breaking down their techniques, finding new ways of applying them to the America he knew, one in which the struggle for civil rights became all-absorbing. By the time of the March on Washington in 1963, he had begun to experiment with the Projections, as he called his major collages, in which he tried to capture the full spectrum of the black experience, from the grind of daily life to broader visions and aspirations. Campbell's book offers a full and vibrant account of Bearden's life -- his years in Harlem (his studio was above the Apollo theater), to his travels and commissions, along with illuminating analysis of his work and artistic career. Campbell, who met Bearden in the 1970s, was among the first to compile a catalogue of his works. An American Odyssey goes far beyond that, offering a living portrait of an artist and the impact he made upon the world he sought both to recreate and celebrate.

Mary Schmidt Campbell is President of Spelman College and Dean Emerita of the Tisch School of the Arts. She served as the vice chair of the President's Committee on the Arts and Humanities under former President Barack Obama.