The Cradle of Humanity: How the Changing Landscape of Africa Made Us So Smart (Paperback) 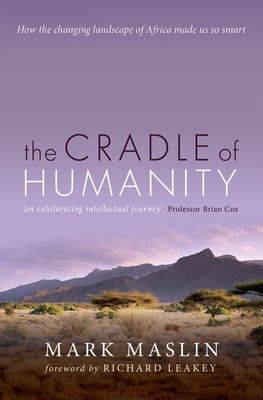 The Cradle of Humanity: How the Changing Landscape of Africa Made Us So Smart (Paperback)


On Our Shelves Now
Humans are rather weak when compared with many other animals. We are not particularly fast and have no natural weapons. Yet Homo sapiens currently number nearly 7.5 billion and are set to rise to nearly 10 billion by the middle of this century. We have influenced almost every part of the Earth
system and as a consequence are changing the global environmental and evolutionary trajectory of the Earth. So how did we become the worlds apex predator and take over the planet? Fundamental to our success is our intelligence, not only individually but more importantly collectively. But why did evolution favour the brainy ape? Given the calorific cost of running our large brains, not to mention the difficulties posed for childbirth, this bizarre adaptation must have given
our ancestors a considerable advantage. In this book Mark Maslin brings together the latest insights from hominin fossils and combines them with evidence of the changing landscape of the East African Rift Valley to show how all these factors led to selection pressures that favoured our ultrasocial
brains. Astronomy, geology, climate, and landscape all had a part to play in making East Africa the cradle of humanity and allowing us to dominate the planet.

Mark Maslin, Professor of Geography, University College London Mark Maslin is Professor of Palaeoclimatology at University College London. He is a Royal Society Wolfson Research Merit Award holder, a Royal Society Industry Fellow, and a Fellow of the Royal Geographic Society. Maslin has published over 160 papers in journals such as Science and Nature on pastand future climate change and its effects on the carbon cycle, human health, biodiversity, and human evolution. He is the author of Climate: A Very Short Introduction (OUP, 2013), and Climate Change: A Very Short Introduction (OUP, 2014), now in its third editon.