END_OF_DOCUMENT_TOKEN_TO_BE_REPLACED

Freedom Riders: 1961 and the Struggle for Racial Justice (Abridged / Paperback) 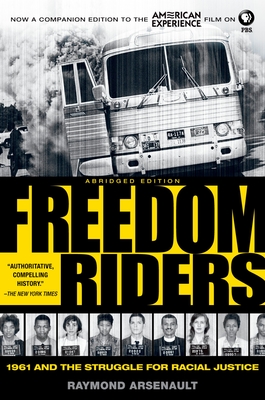 The saga of the Freedom Rides is an improbable, almost unbelievable story. In the course of six months in 1961, four hundred and fifty Freedom Riders expanded the realm of the possible in American politics, redefining the limits of dissent and setting the stage for the civil rights movement.
In this new version of his encyclopedic Freedom Riders, Raymond Arsenault offers a significantly condensed and tautly written account. With characters and plot lines rivaling those of the most imaginative fiction, this is a tale of heroic sacrifice and unexpected triumph. Arsenault recounts how a
group of volunteers--blacks and whites--came together to travel from Washington DC through the Deep South, defying Jim Crow laws in buses and terminals and putting their lives on the line for racial justice. News photographers captured the violence in Montgomery, shocking the nation and sparking a
crisis in the Kennedy administration. Here are the key players--their fears and courage, their determination and second thoughts, and the agonizing choices they faced as they took on Jim Crow--and triumphed. Winner of the Owsley Prize Publication is timed to coincide with the airing of the American Experience miniseries documenting the Freedom Rides Arsenault brings vividly to life a defining moment in modern American history.
--Eric Foner, The New York Times Book Review Authoritative, compelling history.
--William Grimes, The New York Times For those interested in understanding 20th-century America, this is an essential book.
--Roger Wilkins, Washington Post Book World Arsenault's record of strategy sessions, church vigils, bloody assaults, mass arrests, political maneuverings and personal anguish captures the mood and the turmoil, the excitement and the confusion of the movement and the time.
--Michael Kenney, The Boston Globe