The Madhouse Effect: How Climate Change Denial Is Threatening Our Planet, Destroying Our Politics, and Driving Us Crazy (Paperback) 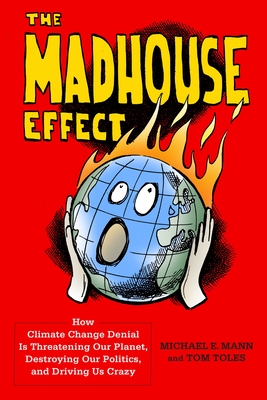 The Madhouse Effect: How Climate Change Denial Is Threatening Our Planet, Destroying Our Politics, and Driving Us Crazy (Paperback)

The award-winning climate scientist Michael E. Mann and the Pulitzer Prize-winning political cartoonist Tom Toles have been on the front lines of the fight against climate denialism for most of their careers. They have witnessed the manipulation of the media by business and political interests and the unconscionable play to partisanship on issues that affect the well-being of billions. The lessons they have learned have been invaluable, inspiring this brilliant, colorful escape hatch from the madhouse of the climate wars.

The Madhouse Effect portrays the intellectual pretzels into which denialists must twist logic to explain away the clear evidence that human activity has changed Earth's climate. Toles's cartoons collapse counter-scientific strategies into their biased components, helping readers see how to best strike at these fallacies. Mann's expert skills at science communication aim to restore sanity to a debate that continues to rage against widely acknowledged scientific consensus. The synergy of these two climate science crusaders enlivens the gloom and doom of so many climate-themed books--and may even convert die-hard doubters to the side of sound science.

Michael E. Mann is Distinguished Professor of Atmospheric Science and director of the Earth Systems Science Center at Penn State University. He is the author of The Hockey Stick and the Climate Wars: Dispatches from the Front Lines (Columbia, 2012) and a fellow of the American Meteorological Society, the American Geophysical Union, and the American Association for the Advancement of Science. Tom Toles is the Pulitzer Prize-winning cartoonist of the Washington Post. He has a particular interest in climate change science and has worked consistently to advance understanding of this subject, including its political context, since the 1980s.