A Time to Stir: Columbia '68 (Hardcover) 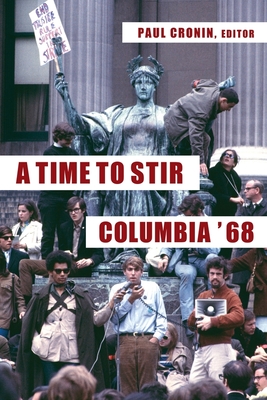 A Time to Stir: Columbia '68 (Hardcover)

By Paul Cronin (Editor)
List Price: $37.00
Our Price: $35.00
(Save: $2.00 5%)
On Our Shelves Now
For seven days in April 1968, students occupied five buildings on the campus of Columbia University to protest a planned gymnasium in a nearby Harlem park, links between the university and the Vietnam War, and what they saw as the university's unresponsive attitude toward their concerns. Exhilarating to some and deeply troubling to others, the student protests paralyzed the university, grabbed the world's attention, and inspired other uprisings. Fifty years after the events, A Time to Stir captures the reflections of those who participated in and witnessed the Columbia rebellion. With more than sixty essays from members of the Columbia chapter of Students for a Democratic Society, the Students' Afro-American Society, faculty, undergraduates who opposed the protests, "outside agitators," and members of the New York Police Department, A Time to Stir sheds light on the politics, passions, and ideals of the 1960s. Moving beyond accounts from the student movement's white leadership, this book presents the perspectives of black students, who were grappling with their uneasy integration into a supposedly liberal campus, as well as the views of women, who began to question their second-class status within the protest movement and society at large. A Time to Stir also speaks to the complicated legacy of the uprising. For many, the events at Columbia inspired a lifelong dedication to social causes, while for others they signaled the beginning of the chaos that would soon engulf the left. Taken together, these reflections present a nuanced and moving portrait that reflects the sense of possibility and excess that characterized the 1960s.
Paul Cronin teaches at the School of Visual Arts. His books include Werner Herzog: A Guide for the Perplexed (2014) and Lessons with Kiarostami (2015). His films include a study of Haskell Wexler's Medium Cool, as well as a multichapter documentary on the Columbia University protests of 1968 to accompany this book.