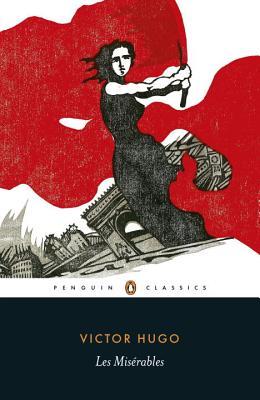 
On Our Shelves Now
The first new Penguin Classics translation in forty years of Victor Hugo’s masterpiece, the subject of The Novel of the Century by David Bellos. Winner of the French-American Foundation & Florence Gould Foundation’s 29th Annual Translation Prize in Fiction.

The subject of the world’s longest-running musical and the award-winning film, Les Misérables is a genuine literary treasure. Victor Hugo’s tale of injustice, heroism, and love follows the fortunes of Jean Valjean, an escaped convict determined to put his criminal past behind him, and has been a perennial favorite since it first appeared over 150 years ago. This exciting new translation will be a gift both to readers who have already fallen for its timeless story and to new readers discovering it for the first time.

For more than seventy years, Penguin has been the leading publisher of classic literature in the English-speaking world. With more than 1,700 titles, Penguin Classics represents a global bookshelf of the best works throughout history and across genres and disciplines. Readers trust the series to provide authoritative texts enhanced by introductions and notes by distinguished scholars and contemporary authors, as well as up-to-date translations by award-winning translators.
Christine Donougher is a freelance translator and editor. She has translated numerous books from French and Italian, and won the 1992 Scott Moncrieff Translation Prize for her translation of Sylvie Germain's The Book of Nights.

"Hugo's genius was for the creation of simple and recognizable myth. The huge success of Les Misérables as a didactic work on behalf of the poor and oppressed is due to his poetic and myth-enlarged view of human nature." —V. S. Pritchett

"It was Tolstoy who vindicated [Hugo's] early ambition by judging Les Misérables one of the world's great novels, if not the greatest… [His] ability to present the extremes of experience 'as they are' is, in the end, Hugo's great gift." —From the Introduction by Peter Washington