The Chronicles of Panchita Villa and Other Guerrilleras: Essays on Chicana/Latina Literature and Criticism (Chicana Matters) (Paperback) 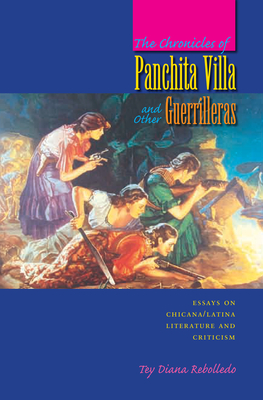 The Chronicles of Panchita Villa and Other Guerrilleras: Essays on Chicana/Latina Literature and Criticism (Chicana Matters) (Paperback)


On Our Shelves Now
Although there have been substantial contributions to Chicana literature and criticism over the past few decades, Chicanas are still underrepresented and underappreciated in the mainstream literary world and virtually nonexistent in the canon. Writers like Sandra Cisneros, Ana Castillo, and Gloria Anzaldúa have managed to find larger audiences and critical respect, but there are legions of Chicana writers and artists who have been marginalized and ignored despite their talent. Even in Chicano anthologies, the focus has tended to be more on male writers. Chicanas have often found themselves without a real home in the academic world. Tey Diana Rebolledo has been writing about Chicana/Latina identity, literature, discrimination, and feminism for more than two decades. In this collection of essays, she brings together both old and new works to give a state-of-the-moment look at the still largely unanswered questions raised by vigilant women of color throughout the last half of the twentieth century. An intimate introductory essay about Rebolledo's personal experiences as the daughter of a Mexican mother and a Peruvian father serves to lay the groundwork for the rest of the volume. The essays delve into the historical development of Chicana writing and its early narratives, the representation of Chicanas as seen on book covers, Chicana feminism, being a Chicana critic in the academy, Chicana art history, and Chicana creativity. Rebolledo encourages “guerrillera” warfare against academia in order to open up the literary canon to Chicana/Latina writers who deserve validation.
TEY DIANA REBOLLEDO is Regents' Professor and Chair in the Department of Spanish and Portuguese at the University of New Mexico.