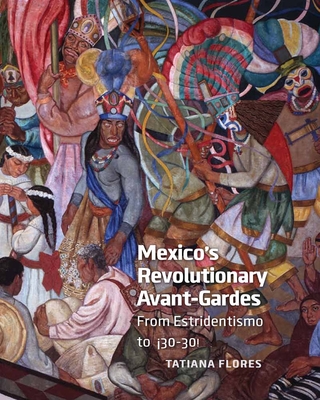 
On Our Shelves Now
In December 1921, the poet Manuel Maples Arce (1898–1981) papered the walls of Mexico City with his manifesto Actual No. 1, sparking the movement Estridentismo (Stridentism). Inspired by Mexico’s rapid modernization following the Mexican Revolution, the Estridentistas attempted to overturn the status quo in Mexican culture, taking inspiration from contemporary European movements and methods of expression.

Mexico’s Revolutionary Avant-Gardes provides a nuanced account of the early-20th-century moment that came to be known as the Mexican Renaissance, featuring an impressive range of artists and writers. Relying on extensive documentary research and previously unpublished archival materials, author Tatiana Flores expands the conventional history of Estridentismo by including its offshoot movement ¡30–30! and underscoring Mexico’s role in the broader development of modernism worldwide. Focusing on the interrelationship between art and literature, she illuminates the complexities of post-revolutionary Mexican art at a time when it was torn between formal innovation and social relevance.

Runner-up for the 2014 Los Angeles Book Festival in the Photography/Art Category.

“Rutgers art historian Flores charts a strikingly clear and insightful course through Mexican avant-garde art in the early 20th century . . . [a] consistently engaging voice and the impressive reproductions of rare Estridentismo and ¡30-30! images extend it beyond a specialized audience, making an understudied moment in art history appear both fresh and vital again.”—Publishers Weekly
— Publishers Weekly

“In this well-deserved treatment, readers will gain considerable knowledge of the theoretical underpinnings and artistic expressions of the multi-faceted Mexican avant-garde. By addressing the secondary members of the muralist movement, the literary groups associated with the artists. . . and the multiple manifestos produced by different groups, Flores weaves a complex history that encompasses cultural responses to the Mexican Revolution.”—Choice
— Choice