END_OF_DOCUMENT_TOKEN_TO_BE_REPLACED

On the Laps of Gods: The Red Summer of 1919 and the Struggle for Justice That Remade a Nation (Paperback) 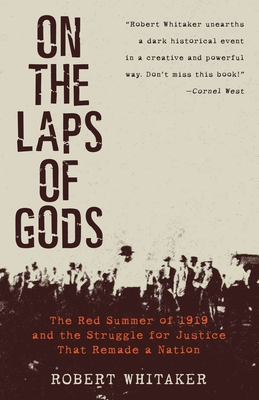 September 30, 1919. The United States teetered on the edge of a racial civil war. During the previous three months, racial fighting had erupted in twenty-five cities. And deep in the Arkansas Delta, black sharecroppers were meeting in a humble wooden church, forming a union and making plans to sue their white landowners. A car pulled up outside the church . . .

What happened next has long been shrouded in controversy.

In this heartbreaking but ultimately triumphant story of courage and will, journalist Robert Whitaker carefully documents–and exposes–one of the worst racial massacres in American history. On the Laps of Gods is the story of the 1919 Elaine massacre in Hoop Spur, Arkansas, during which white mobs and federal troops killed more than one hundred black men, women, and children; of the twelve black men subsequently condemned to die; of Scipio Africanus Jones, a former slave and tenacious black attorney; and of Moore v. Dempsey, the case Jones brought to the Supreme Court, which set the legal stage for the civil rights movement half a century later.

ROBERT WHITAKER is the award-winning author of The Mapmaker’s Wife and Mad in America. His manuscript of On the Laps of Gods won the prestigious J. Anthony Lukas Work-in-Progress Award.

"One of the fifty best nonfiction books of 2008."
—San Francisco Chronicle

"Whitaker has . . . placed the massacre and the Supreme Court decision in their full legal and historical context. At the same time, he has revived the story of a great African American
lawyer, Scipio Africanus Jones."
—New York Times Book Review

“State-sponsored terrorism is not a new phenomenon in American history; for nearly a century, it was part of the daily lot of African Americans living in the Jim Crow South. Nowhere was that reality more brutally revealed than in Phillips County, Arkansas, where in 1919 a white mob, deputized by state authorities and assisted by units of the U.S. Army, slaughtered some two hundred men, women, and children – sharecroppers whose sole offense was organizing to obtain a fair price for the cotton they grew. Robert Whitaker has reconstructed this long-forgotten episode in riveting detail. His book plumbs the depths of hatred and injustice, yet it is also a story of hope, embodied in the unlikely figure of attorney Scipio Africanus Jones, a former slave, whose dogged defense of survivors of the massacre prevented a legal lynching and changed the face of American jurisprudence.
—James T. Campbell, author of Middle Passages: African American Journeys to Africa, 1787-2005, finalist for the 2007 Pulitzer Prize in History and winner of the Mark Lynton History Prize

“At the heart of this masterful narrative is Scipio Jones, a man born a slave, who became one of this country's greatest lawyers. During the awful period of racial ethnic cleansing that convulsed our country for so long, Jones turned an American tragedy into an American triumph. Bob Whitaker gives an account of a footnote of our history that is at the heart of what we aim at our best, to be as a nation. On these pages, there is an admirable and confident understanding of the ultimate scale of these events. Whitaker casts an unstinting eye back at America's brutal racial past and the power of individuals, black and white to shape individual and national destiny.”
—Marita Golden, author of Don't Play in the Sun: One Woman's Journey Through the Color Complex

“Like the classic Gideon's Trumpet, On theLaps of Gods tells the dramatic story of how extraordinary citizens fought for a basic right–in this case to a fair and proper trial–that became fundamental to our national identity. This tale alone, and Whitaker's portrayal of attorney Scipio Africanus Jones, would have made for a great book, but he gives us much more as he brings alive the tragic and oft-forgotten details of racial violence in the American heartland and reveals a history that can make us weep and also cheer.  Startling, artful, and filled with truth, this is an important and compelling book.”
—Michael D'Antonio, author of The State Boys Rebellion and Hershey