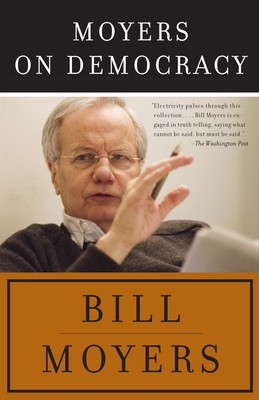 By Bill Moyers
List Price: $16.95
Our Price: $16.00
(Save: $0.95 6%)
On Our Shelves Now
People know Bill Moyers from his many years of path-breaking journalism on television. But he is also one of America's most sought-after public speakers. In this collection of speeches, Moyers celebrates the promise of American democracy and offers a passionate defense of its principles of fairness and justice. Moyers on Democracy takes on crucial issues such as economic inequality, our broken electoral process, our weakened independent press, and the despoiling of the earth we share as our common gift.
Bill Moyers was one of the organizers of the Peace Corps, Press Secretary under President Lyndon Johnson from 1965 until 1967, publisher of Newsday, senior correspondent for CBS News, and producer of many of public television's groundbreaking series. He is the winner of more than thirty Emmy Awards, and the author of the bestselling books Listening to America, A World of Ideas, Healing and the Mind, and Moyers on America. In April 2007 Bill Moyers returned to PBS with his weekly show Bill Moyers' Journal.
“Electricity puls[es] through this collection. . . . Bill Moyers is engaged in truth telling, saying what cannot be said, but must be said.” —The Washington Post“Bill Moyers has been my North Star, in his eloquence, his quiet passion and courage, and in the way he presents me and millions of others with the ideals of our nation, from our past to our present to our uncertain future. Always he offers the gifts of thoughtfulness and of hope.”—Studs Terkel“Moyers is, simply, a national treasure, a reminder that we redeem the promise of America more through the morality, humanity and insights of unelected visionaries than insider politicians.” —Mark Green, The Huffington Post“Personal and reflective.... Bespeaks significant personal integrity.”—Los Angeles Times“Moyers seems to have been born with unusual wisdom. . . . He feels deeply, he knows language well and he tells true stories that stun the listener.” —Deseret News (Salt Lake City)“Bill Moyers speaks for, and to, the conscience of our nation.”—Walter Cronkite