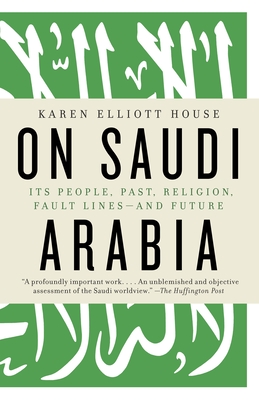 With over thirty years of experience writing about Saudi Arabia, Pulitzer Prize-winning reporter and former publisher of The Wall Street Journal Karen Elliott House has an unprecedented knowledge of life inside this shrouded kingdom. Through anecdotes, observation, analysis, and extensive interviews, she navigates the maze in which Saudi citizens find themselves trapped and reveals the sometimes contradictory nature of the nation that is simultaneously a final bulwark against revolution in the Middle East and a wellspring of Islamic terrorists.

Saudi Arabia finds itself threatened by fissures and forces on all sides, and On Saudi Arabia explores in depth what this portends for the country’s future—and our own.

Karen Elliott House is a graduate of the University of Texas at Austin. She studied and taught at Harvard University’s Institute of Politics and was a senior fellow at the John F. Kennedy School of Government at Harvard University. House lives in Princeton, New Jersey, with her husband, Peter R. Kann, and their children.

A New York Times, Washington Post, and Newsweek Best Book of the Year

“A profoundly important work. . . . An unblemished and objective assessment of the Saudi worldview.”
—The Huffington Post

“Few books about Saudi Arabia will chill the reader as artfully as Karen Elliott House’s. . . . Provocative . . . a must-read for anyone interested in human rights, global politics and the future of the weakening Saudi state.”
—San Francisco Chronicle

“Recommended reading for all those seeking a new perspective on one of the world’s most consequential societies.”
—Henry A. Kissinger

“Fascinating. . . . An important book that offers insights into the kingdom’s fault lines, as well as gentle suggestions for a positive diplomacy.”
—The Washington Post

“The vignettes [House] assembles are not only entertaining and lucidly drawn, but also offer a rare glimpse into a world that is normally closed to Western reporters. . . . Eloquent and timely. . . . Presenting these issues in a readable yet serious book is a rare feat indeed, and she should be commended for it.”
—The New Republic

“House demonstrates an unparalleled understanding of the dynamics of Saudi society. Her extraordinary access to Saudis from all walks of life and her keen insights . . . greatly enrich the reader’s understanding.”
—Senator Susan Collins (Maine), Ranking Member of the Senate Committee on Homeland Security and Governmental Affairs

“A gem of reporting on one of the hardest stories to crack. . . . [House] is one of the wiliest and most determined newspaperwomen of her generation. . . . Illuminating. . . . Masterful.”
—The New York Sun

“A valuable assessment of where the kingdom is and where it might go. A stimulating and worthwhile read.”
—George P. Shultz

“Revealing and impressively reported . . . House's 30-plus years' experience in one of the least accessible countries makes us see, hear, and experience Saudi Arabia like a local.”
—Tina Brown, The Daily Beast, "Favorite Books of 2012"

“A deeply reported look at an increasingly complicated and fragile society.”
—The Kansas City Star

“An incisive analysis of divisive dynamics inside the world’s most important supplier of oil. House asks hard questions about the future of Saudi Arabia.”
—Graham Allison, Director of the Belfer Center for Science and International Affairs, Harvard University

“Well-researched, informative. . . . House succeeds in capturing the diversity of Saudi society, painting a more complex picture than the caricature of oil wells and extreme wealth.”
—Kirkus