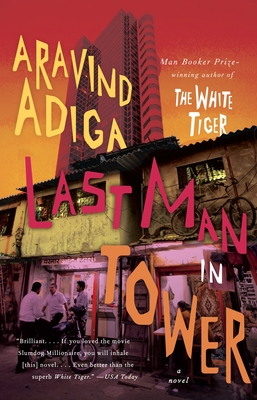 From the Booker Prize–winning author of The White Tiger, a stunning novel of greed and murder in contemporary Mumbai.

At the heart of Adiga's gripping second novel ("his plots don’t unwind, they surge" —USA Today) are two equally compelling men, poised for a showdown.

Real estate developer Dharmen Shah rose from nothing to create an empire and hopes to seal his legacy with a luxury building named the Shanghai. Larger-than-life Shah is a dangerous man to refuse. But he meets his match in retired schoolteacher Masterji. Shah offers a generous buyout to Masterji and his neighbors in a once respectable, now crumbling apartment building on whose site Shah’s high-rise would be built. They can’t believe their good fortune. Except, that is, for Masterji, who refuses to abandon the building he has long called home.

As the demolition deadline looms, desires mount; neighbors become enemies, and acquaintances turn into conspirators who risk losing their humanity to score their payday. Here is a richly told, suspense-fueled story of ordinary people pushed to their limits in a place that knows none: the new India as only Aravind Adiga could explore—and expose—it.

Aravind Adiga was born in India in 1974 and attended Columbia and Oxford universities. He is the author of Selection Day, the Booker Prize-winning novel The White Tiger, and the story collection Between the Assassinations. He lives in Mumbai, India.

A Best Book of the Year:
The Boston Globe
Richmond Times-Dispatch
The Daily Beast

“Brilliant. . . . If you loved the movie Slumdog Millionaire, you will inhale the novel Last Man in Tower. Adiga’s second novel is even better than the superb White Tiger. . . . First-rate. . . . You simply do not realize how anemic most contemporary fiction is until you read Adiga’s muscular prose. His plots don’t unwind, they surge.”
—USA Today

“Provocative and decadent. . . . The kind of novel that’s so richly insightful . . . it’s hard to know where to begin singing its praises. . . . Vain, shrewd and stubborn, [Masterji] is one of the most delightfully contradictory characters to appear in recent fiction.”
—The Washington Post

“Masterful. . . . With this gripping, amusing glimpse into the contradictions and perils of modern India, Adiga cements his reputation as the preeminent chronicler of his country’s messy present.”
—Newsweek

“Adiga has written the story of a New India. . . . This funny and poignant story is multidimensional, layered with many engaging stories and characters.”
—The Seattle Times

“A rare achievement. . . . Adiga captures with heartbreaking authenticity the real struggle in Indian cities, which is for dignity. A funny yet deeply melancholic work, Last Man in Tower is a brilliant, and remarkably mature, second novel.”
—The Economist

“With wit and observation, Adiga gives readers a well-rounded portrait of Mumbai in all of its teeming, bleating, inefficient glory. . . . Like any good novelist, Adiga’s story lingers because it nestles in the heart and the head.”
—Christian Science Monitor

“Last Man in Tower is a nuanced study of human nature in all of its complexity and mystery. (It is also humane and funny.) Nothing is quite as it seems in the novel, which makes for surprises both pleasant and disturbing.”
—Pittsburgh Post-Gazette

“Adiga populates his fiction with characters from all parts of India’s contemporary social spectrum, and the intensity of his anger at aspects of modern India is modulated by his impish wit.”
—The Wall Street Journal

“Adiga maps out in luminous prose India’s ambivalence toward its accelerated growth, while creating an engaging protagonist . . . a man whose ambition and independence have been tempered with an understanding of the important, if almost imperceptible, difference between development and progress.”
—Entertainment Weekly

“[An] adroit, ruthless and sobering novel. . . . Adiga peppers his universally relevant tour de force with brilliant touches, multiple ironies and an indictment of our nature.”
—The Star Ledger

“Adiga is an exceptionally talented novelist, and the subtlety with which he presents the battle between India’s aspirants and its left-behind poor is exceptional.”
—Richmond Times-Dispatch

“A brilliant examination of the power of money. . . . Ultimately Last Man in Tower is about how greed affects compassion. . . . Adiga skillfully unfolds a surprising conclusion that underscores what a great novel this is.”
—Minneapolis Star-Tribune

“[Full of] acute observations and sharp imagery. . . . Like all cautionary tales, it embodies more than a little truth about our times.”
—Financial Times

“Dickensian. . . . Well worth the time of any reader interested in the circumstances of life in a seemingly foreign place that turns out to be awfully familiar. . . . Readers above all else will find pleasure and pain in the ups and downs of the human family itself.”
—San Francisco Chronicle