The Blood Telegram: Nixon, Kissinger, and a Forgotten Genocide (Paperback) 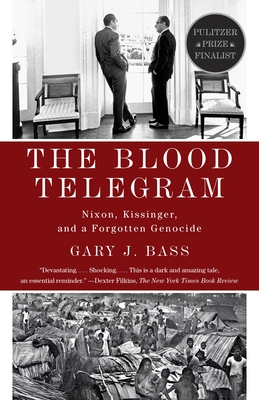 The Blood Telegram: Nixon, Kissinger, and a Forgotten Genocide (Paperback)

This magnificent history provides the first full account of Richard Nixon and Henry Kissinger’s secret support for Pakistan in 1971 as it committed shocking atrocities in Bangladesh—which led to war between India and Pakistan, shaped the fate of Asia, and left major strategic consequences for the world today.

Gary J. Bass is the author of Freedom’s Battle: The Origins of Humanitarian Intervention and Stay the Hand of Vengeance: The Politics of War Crimes Tribunals. He is a professor of politics and international affairs at Princeton University. A former reporter for The Economist, he often writes for The New York Times and has also written for The New Yorker, The Washington Post, The Los Angeles Times, The Boston Globe, The New Republic, Foreign Affairs, Foreign Policy, Slate, and other publications.

"This is a dark and amazing tale, an essential reminder . . . Devastating . . . Shocking . . . Nixon and Kissinger spent the decades after leaving office burnishing their images as great statesmen. This book goes a long way in showing just how undeserved those reputations are."
—Dexter Filkins, The New York Times Book Review

"[A] gripping and well-researched book . . . Sheds fresh light on a shameful moment in American foreign policy . . . Admirable clarity."
—The Economist

"A profoundly disturbing account of the hitherto hidden role of Richard Nixon and Henry Kissinger in the slaughter of hundreds of thousands . . . Bass has defeated the attempted coverup through laborious culling of relevant sections of the Nixon White House tapes, declassified State Department documents and interviews with former officials, American and Indian, who were involved . . . After reading Bass's account of this shameful episode, one has to . . . conclude that where the Bengalis were concerned, Kissinger and Nixon simply did not give a damn."
—Neil Sheehan, The Washington Post

"Bass takes us inside the Oval Office to reveal the scandalous role America played in the 1971 slaughter in what is now Bangladesh. Largely unknown here, the story combines the human tragedy of Darfur, the superpower geopolitics of the Cuban missile crisis and the illegal shenanigans of Iran-contra . . . [A] harrowing tale."
—Peter Baker, The New York Times, Favorite Book of the Year

"Devastating . . . Excellent . . . Bass, a historian at Princeton, has written an account—learned, riveting, and eviscerating—of the delusions and the deceptions of Nixon and Kissinger. Steeped in the forensic skills of a professional academic historian, he also possesses the imaginative energies of a classical moralist, and he tells the story of the choices and the decisions that led to the slaughter in Bengal . . . appropriately as a moral saga . . . Indispensable."
—Sunil Khilnani, The New Republic

"A riveting read with direct relevance to many of the most acute foreign-policy debates of today."
—Gideon Rachman, Financial Times

"Absorbing . . . Bass draws up a severe indictment of Nixon and Kissinger."
—Pankaj Mishra, The New Yorker

"The best book I read this year was Gary Bass's The Blood Telegram, which showed through superb reporting and excellent analysis that Richard Nixon and Henry Kissinger gleefully abetted the slaughter of hundreds of thousands of innocent Bengalis . . . Excellent."
—Isaac Chotiner, The New Republic, Best Books of the Year

"Thankfully, Princeton University professor Gary Bass has provided us with a helpful reminder of Nixon's true character. In The Blood Telegram, Bass expertly recounts the stunning indifference of Nixon and . . . Henry Kissinger  to the reports from US diplomats of Pakistani genocide . . . Vivid, often disquieting detail from Oval Office tapes unearthed by Bass . . . Bass has performed an essential function."
—Michael Cohen, The Guardian

"It was a non-subject for scholars, a no man's land for knowledge . . . [u]ntil the arrival of a memorable book by Princeton professor Gary Bass . . . While doing justice to the victims, also, for the first time, draws out for us its lessons  . . . The book is also a tribute to politics in its true sense . . . I do want readers to be aware of the appearance of Gary Bass' book, which I hope will be widely read (and translated into French!) . . . A return to Bangladesh is required reading."
—Bernard-Henri Lévy, Le Point

"[A] stellar new book . . . Astonishing . . . The Blood Telegram . . . remedies that omission. . . A meticulously researched and searing indictment of the shameful role the United States played . . . The book tells of the damage wrought when world leaders abandon rational calculation and allow their country's interests to be subordinated to personal prejudices and animosities."
—Foreign Policy

"Bass has written the definitive account of the political machinations behind one of the worst (and most widely ignored) humanitarian crises of the 20th century . . . Bass also offers Americans much-needed context about America's pre-9/11 involvement in a region where it still finds itself with bloody hands . . . Nuanced yet unflinching . . . Bass shines a much-needed spotlight . . . Fascinating and truly frightening."
—Nick Turse, The Daily Beast

"A vital contribution . . . Bass is the first to investigate in any detail the complicity of President Richard Nixon . . . Bass's meticulous scholarship demonstrates how both Nixon and Kissinger . . . became witting accomplices to this genocide . . . Important . . . He demonstrates an extraordinary grasp of the internal politics of the country [India] . . . Bass's painstaking research and his scrupulous portrayal of the choices that created permissive conditions for the genocide should now lead to a much-needed reappraisal of the foreign policy legacies of both individuals."
—Sumit Ganguly, International Security

"Gripping and excruciating . . . A powerful reminder of the frailty of international law in international crises . . . A must-read . . . Remarkable."
—European Journal of International Law, Best Books of the Year

"Fascinating . . . [A] rich book, constantly shifting between Washington, New Delhi and Islamabad, all corners of the narrative expertly covered by the author . . . Bass's skill in unravelling the complex strands . . . is admirable."
—Michael Young, The National

"A searing indictment . . . A shocking tale . . . We witness here the best of American diplomatic tradition . . . against the worst in the White House . . . The Blood Telegram sends an acidic whiff from the past to the present through a deeply cautionary tale."
—William Thorsell, The Globe and Mail (Toronto)

"It has been a long time since I have read a book that has spoken as powerfully to me as The Blood Telegram. The relevancy and power of this book stems from the basic moral dilemmas that it addresses on practically every page. Every person planning to join the United States Foreign Service, or already serving should read this book."
—American Diplomacy

"Gripping . . . [An] uncommonly fine addition to the histories of the Cold War era . . . The immediacy of good page-turning journalism."
—National Catholic Reporter

"With urgent, cinematic immediacy, Gary Bass reconstructs a critical—and, to this day, profoundly consequential—chapter of Cold War history defined by appalling American complicity in genocidal atrocity and terrifyingly high-stakes superpower brinkmanship. It is a story of immense scope, vividly populated by figures of enduring fascination, and ripe with implications for the ongoing struggle to strike a more honorable balance between wartime realpolitik and our ideals of common humanity."
—Philip Gourevitch, author of We Wish to Inform You That Tomorrow We Will Be Killed With Our Families

"Gary Bass has excavated a great tragedy, one that's been forgotten by Americans but is seared into the memory of South Asians. His talents as a scholar, writer, and foreign-policy analyst are on full display in this brilliant work of narrative history. Nixon and Kissinger come damningly alive on the pages of a book that shows, like nothing else I’ve read, the folly that goes by the name of 'realism.' "
—George Packer, author of The Unwinding: An Inner History of the New America

"Gary Bass has done it again, uncovering a dark chapter in the historical record and bringing it vividly to light, forcing us to confront who we were then and who we are now. The Blood Telegram is a richly textured story with many fascinating layers, from the moral bankruptcy of U.S. leaders in the face of genocide to the multi-faceted politics of South Asia and the lasting geopolitical legacy of these events. It's also simply hard to put down!"
—Anne-Marie Slaughter, author of A New World Order

"Gary Bass is unique: an investigative historian who explores the past in a masterly way that combines the best of journalism and scholarship. His latest book reads like an urgent dispatch from the frontline of genocide, a lucid and poignant description of a moral collapse in American foreign policy. Bass has painstakingly written a vital history—and a story, in the best sense of the word—that we must come to grips with."
—Peter Maass, author of Love Thy Neighbor: A Story of War

"The most notable new arrival on most people’s bookshelves is Gary Bass' Blood Telegram . . . Readers are given a full account of the horrors of that near-genocide, and of the cynicism of Richard Nixon and Henry Kissinger. It is a remarkable achievement, and deserves to be on every shelf."
—Mihir S. Sharma, Business Standard

"This is an immensely absorbing book for those interested in not just Indo-US relations but the making of foreign policy in democracies as a whole."
—The Indian Express

"The book sets the record straight of a disgraceful period in US foreign policy . . . Brutal detail . . . Nixon stands disgraced over Watergate but his wilful role in the genocide in East Pakistan had not till now received the full historical attention it deserved."
—Minhaz Merchant, The Times of India

"He writes in a vivid and racy style and never fails to hold the reader's attention. The book is a thoroughly researched and damning indictment . . . Bass demolishes Kissinger’s defence . . . Deeply perceptive."
—Outlook India

"Gripping. His material is so rich and his research so detailed that it is difficult to put down the book once one begins to read it . . . Bass has accomplished something truly remarkable."
—The Asian Age

"A scathing indictment . . . Bass . . . dismantles the smug aura of success that has generally been attached to the Kissinger-Nixon era . . . The book combines a racy narrative with meticulous research and excellent academic rigour. . . Bass offers a fresh perspective."
—The Hindu

"Most admirable and thorough . . . An accomplished scholar of human rights, Bass draws on a mass of documents and tapes to shed light on the United States of America's involvement . . . Bass's cumulative indictment of Nixon and Kissinger is formidable . . . The wealth of detail and the range of insights in this fine book."
—Srinath Raghavan, The Telegraph (Kolkata)

“A must read . . . It is one of the finest books on the 1971 war written by a neutral observer . . . The author makes an honest effort to find out what made the US administration a mute spectator in one of the worst genocides of our times.”
—CNN-IBN

"Very important . . . Painstaking . . . Valuable . . . The book connects the killing fields of Bangladesh to the idyllic setting of the White House and presents the strongest link between them in public till now . . . A close view into the inner mind of power."
—Himal Southasian (Kathmandu)

"The Blood Telegram by Gary Bass is the best single account of how the United States responded to the 1971 Bangladesh independence war . . . Highly readable . . . A justly lauded work . . . A uniquely fascinating glimpse into the operation of power at the highest levels . . . Vivid . . . The best researched and most lucid indictment of the Nixon White House . . . Will certainly stand the test of time. . . It is a worthy tribute to Archer Blood's integrity and professionalism and holds invaluable truths and lessons for future generations."
—Dhaka Tribune

"Fascinating . . . Unique . . . The book is a powerful indictment of Nixon and Kissinger."
—The Friday Times (Lahore)

"Gripping . . . A chilling and bare-knuckle account . . . A scalding view . . . The book spares no players."
—The News International (Pakistan)

"Eminently readable and exhaustively researched . . . Gripping . . . The book is peerless in the sheer quality and quantity of sources it uses . . . An unmatched account."
—Dawn (Karachi)