Funk: The Music, The People, and The Rhythm of The One (Paperback) 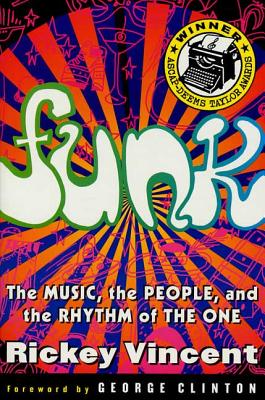 Funk: The Music, The People, and The Rhythm of The One (Paperback)

Funk: It's the only musical genre ever to have transformed the nation into a throbbing army of bell-bottomed, hoop-earringed, rainbow-Afro'd warriors on the dance floor. Its rhythms and lyrics turned bleak urban realties inside out with distinctive, danceable, downright irresistable music.

Funk tells a vital, vibrant history-the history of a uniquely American music born out of tradition and community, filled with energy, attitude, anger, hope, and an irrepressible spirit.

Rickey Vincent has written about music for Vibe, Mondo 2000, and elsewhere. An instructor at San Francisco State University, he is known among Bay Area funkateers as the Uhuru Maggot, thanks to his all-funk radio show on KPFA. He lives in Berkeley, California, with his wife and son.

“This book gives it up! A scholarly , entertaining treatise on an exceedingly worthwhile subject.” —Paul Shaffer