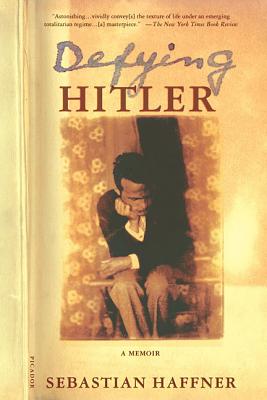 Written in 1939 and unpublished until 2000, Sebastian Haffner's memoir of the rise of Nazism in Germany offers a unique portrait of the lives of ordinary German citizens between the wars. Covering 1907 to 1933, his eyewitness account provides a portrait of a country in constant flux: from the rise of the First Corps, the right-wing voluntary military force set up in 1918 to suppress Communism and precursor to the Nazi storm troopers, to the Hitler Youth movement; from the apocalyptic year of 1923 when inflation crippled the country to Hitler's rise to power. This fascinating personal history elucidates how the average German grappled with a rapidly changing society, while chronicling day-to-day changes in attitudes, beliefs, politics, and prejudices.

Sebastian Haffner was born in Berlin in 1907, and died in 1999. In 1938, he was forced to flee to Britain, where he worked as a journalist. In 1954, he returned to Germany and became a distinguished historian and commentator.

Oliver Pretzel, Sebastian Haffner’s son, is the translator of this work.

“An astonishing memoir...vividly convey[s] the texture of life under an emerging totalitarian regime... [a] masterpiece.” —The New York Times Book Review

“A masterpiece...has more to say about the enduring enigma of Hitler's Reich than almost anything else in the voluminous modern literature on the subject.” —Commentary

“The prophetic insights of a fairly young man...help us understand the plight, as Haffner refers to it, of the non-Nazi German.” —The Denver Post