Sea of Poppies: A Novel (The Ibis Trilogy #1) (Paperback) 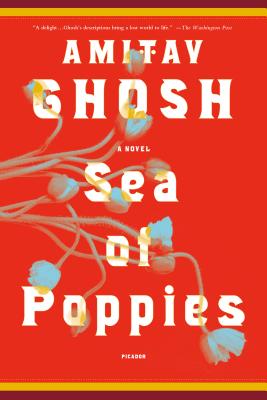 Sea of Poppies: A Novel (The Ibis Trilogy #1) (Paperback)

This is book number 1 in the The Ibis Trilogy series.

The first in an epic trilogy, Amitav Ghosh's Sea of Poppies is "a remarkably rich saga . . . which has plenty of action and adventure à la Dumas, but moments also of Tolstoyan penetration--and a drop or two of Dickensian sentiment" (The Observer [London]).

At the heart of this vibrant saga is a vast ship, the Ibis. Her destiny is a tumultuous voyage across the Indian Ocean shortly before the outbreak of the Opium Wars in China. In a time of colonial upheaval, fate has thrown together a diverse cast of Indians and Westerners on board, from a bankrupt raja to a widowed tribeswoman, from a mulatto American freedman to a free-spirited French orphan. As their old family ties are washed away, they, like their historical counterparts, come to view themselves as jahaj-bhais, or ship-brothers. The vast sweep of this historical adventure spans the lush poppy fields of the Ganges, the rolling high seas, and the exotic backstreets of Canton.

With a panorama of characters whose diaspora encapsulates the vexed colonial history of the East itself, Sea of Poppies is "a storm-tossed adventure worthy of Sir Walter Scott" (Vogue).

AMITAV GHOSH is the internationally bestselling author of many works of fiction and nonfiction, including The Glass Palace, The Great Derangement, and the Ibis Trilogy (Sea of Poppies, River of Smoke, and Flood of Fire). He is the recipient of numerous awards and prizes. Ghosh divides his time between Kolkata and Goa, India, and Brooklyn, New York.

“A wonderful book, a large ambitious novel in which extraordinary people come to life and vibrant, exotic places are memorably depicted.” —The Rocky Mountain News

“A delight . . . [Ghosh's] descriptions bring a lost world to life.” —The Washington Post

“Brilliant...By the book's stormy and precarious ending, most readers will clutch it like the ship's rail awaiting, just like Ghosh's characters, the rest of the voyage to a destination unknown.” —USA Today

“Ghosh's best and most ambitious work yet. . . . Ghosh writes with impeccable control, and with a vivid and sometimes surprising imagination.” —The New Yorker

“Ghosh, on behalf of history, is unforgiving, but his novel is also a delight.” —Miami Herald

“Amitav Ghosh's new novel speaks in tongues, marvelously capturing the polyglot nature of its characters. . . . Sea of Poppies is marvelous, its range and authority astonishing.” —The Plain Dealer (Cleveland)

“Sea of Poppies is a veritable cauldron of energy intermingling with craft.” —Chicago Sun-Times