The Fever: How Malaria Has Ruled Humankind for 500,000 Years (Paperback) 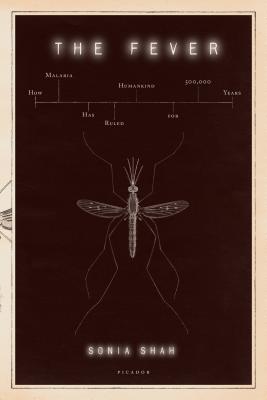 The Fever: How Malaria Has Ruled Humankind for 500,000 Years (Paperback)

“The Fever is a vivid and compelling history with a message that's entirely relevant today.” —Elizabeth Kolbert, author of The Sixth Extinction

Renowned science journalist Sonia Shah explores the surprising history of a disease that has haunted humanity since long before the pandemics of our own time.

In recent years, malaria has emerged as a cause célèbre for voguish philanthropists. Bill Gates, Bono, and Laura Bush are only a few of the personalities who have lent their names—and opened their pocketbooks—in hopes of curing the disease. Still, at a time when the newly emergent COVID-19 pandemic has thrown the high cost of public health failures into stark relief, why aren't we doing more to eradicate one of our oldest foes? And how does a parasitic disease that we've known how to prevent for more than a century still infect 500 million people every year, killing nearly one million of them?

In The Fever, prizewinning journalist Sonia Shah sets out to answer these questions, delivering a timely, inquisitive chronicle of the illness and its effect on human history. Over the centuries, she finds, we've placed our hopes in a panoply of drugs and technologies, only to find them dashed. From the settling of the New World to the construction of the Panama Canal, through wars and the advances of the Industrial Revolution, Shah tracks malaria's jagged ascent and the tragedies in its wake, revealing a parasite every bit as persistent as the insects that carry it.

Combining lucid prose and original reporting from Panama, Malawi, Cameroon, India, and elsewhere, The Fever captures the curiously fascinating, utterly devastating history of one of humanity's most dogged foes—yielding essential lessons for our own time.

Sonia Shah is a science journalist and prizewinning author. Her writing on science, politics, and human rights has appeared in The New York Times, The Wall Street Journal, Foreign Affairs, Scientific American, and elsewhere, and she has been featured on Radiolab, Fresh Air, and TED.com, where her talk “Three Reasons We Still Haven’t Gotten Rid of Malaria” has been viewed by more than a million people around the world. Her book The Fever was long-listed for the Royal Society’s Winton Prize for Science Books, and Pandemic was named a finalist for the Los Angeles Times Book Prize and a New York Times Book Review Editors' Choice.

“Sonia Shah's tour-de-force history of malaria will convince you that the real sound track to our collective fate [is] the syncopated whine-slap, whine-slap of man and mosquito duking it out over the aeons.” —The New York Times

“An often rollicking read . . . Shah has put together an engrossing cast of doctors, malariologists, and historical figures.” —Time

“An insightful book explores the human struggle with malaria not just from a scientific angle, which is cogently detailed without being overwhelming, but also from sociological and anthropological perspectives. . . . Shah is to be commended. ” —The Boston Globe

“The Fever is a vivid and compelling history with a message that's entirely relevant today.” —Elizabeth Kolbert, author of The Sixth Extinction

“I didn't just read The Fever--I inhaled it. It's a fascinating book, elegantly written and superbly well researched: a poignant and important reminder of malaria's relentless human toll.” —Nina Munk, author of Fools Rush In: Steve Case, Jerry Levin, and the Unmaking of AOL Time Warner

“A thrilling detective story, spanning centuries, about our erratic pursuit of a villain still at large and still a threat to mankind. The Fever is rich in colorful detail and engagingly told. An astonishing array of characters has joined the fray, and you can only be amazed at the deviousness and skill of the archenemy.” —Malcolm Molyneux, Professor, Liverpool School of Tropical Medicine