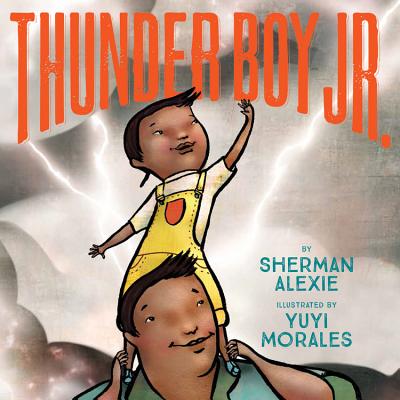 Thunder Boy Jr. wants a normal name...one that's all his own. Dad is known as big Thunder, but little thunder doesn't want to share a name. He wants a name that celebrates something cool he's done like Touch the Clouds, Not Afraid of Ten Thousand Teeth, or Full of Wonder.

But just when Little Thunder thinks all hope is lost, dad picks the best name...Lightning! Their love will be loud and bright, and together they will light up the sky.

A National Book Award-winning author, poet, and filmmaker, Sherman Alexie is one of the most well-known and beloved literary writers of his generation. His works of fiction, including The Absolutely True Diary of a Part-Time Indian, Reservation Blues, and The Lone Ranger and Tonto Fistfight in Heaven, have received numerous awards and citations. He lives in Seattle. Like Thunder Boy Jr., Sherman was named for his father.

Since migrating to the United States from Mexico in 1994, Yuyi Morales has created some of our most celebrated children's books, including Niño Wrestles the World, Harvesting Hope: The Story of Cesar Chavez, and many others. She is the winner of several awards, including a Pura Belpré Medal and a Caldecott Honor for Viva Frida. Yuyi divides her time between Mexico and California.

"Together [Sherman and Morales] deliver a story that feels both modern and timeless, a joyous portrait of one boy's struggle to (literally) make a name for himself in the world."—The New York Times Book Review

* "An enchanting and humorous picture book....This has all of the qualities of a classic story like Goodnight Moon and is destined to be a modern classic, with youngsters wanting repeated readings."—School Library Journal, starred review

* "Even if little one don't pick up on the cultural significance, they'll be entranced by the brilliant illustrations and Thunder Boy's rollicking determination to branch out on his own."—Booklist, starred review

* "Echoes of Alexie's The Absolutely True Diary of a Part-Time Indian resonate in this vibrant first-person tale....Thunder Boy's energy is irresistible, as is this expansive portrait of a Native American family."—Publishers Weekly, starred review

* "Despite the dad-pleasing message, the book is too funny and real to veer into parental self-congratulation, and Morales's illustrations give great life and specificity to Thunder Boy's Lightning's family."—Horn Book, starred review

* "An expertly crafted, soulful, and humorous work that tenderly explores identity, culture, and the bond between father and son."—Kirkus Reviews, starred review

* "Alexie demonstrates his familiar gift for storytelling, using seemingly uncomplicated language to tell a layered and emotional story that retains tension despite being full of love. Even with this boy's complaint, this is a joyous portrait of a family."—The Bulletin of the Center for Children's Books, starred review