The Pull of the Stars: A Novel (Paperback) 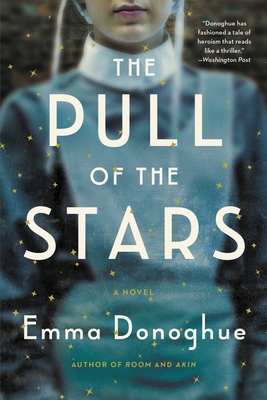 The Pull of the Stars: A Novel (Paperback)


On Our Shelves Now
In Dublin, 1918, a maternity ward at the height of the Great Flu is a small world of work, risk, death, and unlooked-for love, in "Donoghue's best novel since Room" (Kirkus Reviews).

In an Ireland doubly ravaged by war and disease, Nurse Julia Power works at an understaffed hospital in the city center, where expectant mothers who have come down with the terrible new Flu are quarantined together. Into Julia's regimented world step two outsiders—Doctor Kathleen Lynn, a rumoured Rebel on the run from the police, and a young volunteer helper, Bridie Sweeney.

In the darkness and intensity of this tiny ward, over three days, these women change each other's lives in unexpected ways. They lose patients to this baffling pandemic, but they also shepherd new life into a fearful world. With tireless tenderness and humanity, carers and mothers alike somehow do their impossible work.

In The Pull of the Stars, Emma Donoghue once again finds the light in the darkness in this new classic of hope and survival against all odds.

Born in Dublin in 1969, Emma Donoghue is an Irish emigrant twice over: she spent eight years in Cambridge doing a PhD in eighteenth-century literature before moving to London, Ontario, where she lives with her partner and their two children. She also migrates between genres, writing literary history, biography, stage and radio plays as well as fairy tales and short stories. She is best known for her novels, which range from the historical (Slammerkin, Life Mask, Landing, The Sealed Letter) to the contemporary (Stir-Fry, Hood, Landing). Her international bestseller Room was a New York Times Best Book of 2010 and was a finalist for the Man Booker, Commonwealth, and Orange Prizes. For more information, visit www.emmadonoghue.com.

“Don’t believe history repeats itself? Read this book . . . an arresting new page turner of a novel . . . it unfolds at the pace of a thriller.”—Karen Thompson Walker, New York Times

“A deft, lyrical and sometimes even cheeky writer . . . [Donoghue] has given us our first pandemic caregiver novel -- an engrossing and inadvertently topical story about health care workers inside small rooms fighting to preserve life.”—Maureen Corrigan, NPR

“Donoghue has fashioned a tale of heroism that reads like a thriller, complete with gripping action sequences, mortal menaces and triumphs all the more exhilarating for being rare and hard-fought."—Wendy Smith, Washington Post

“Donoghue has pulled off another feat: She wrote a book about a 100-year-old flu that feels completely current, down to the same frustrations and tensions and hopes and dangers. And she did it without even knowing just how relevant it would be -- how well and frighteningly her own reimagining of a historical catastrophe would square with our actual living experience of its modern sequel.”—Carolyn Kellogg, Los Angeles Times

“[Donoghue] conjures up a claustrophobic space -- And into it she brings the world. . . Our collective memory is now a little better anchored, a little more vivid -- thanks to Emma Donoghue.”—Laura Spinney, Wired

“A visceral, harrowing, and revelatory vision of life, death, and love in a time of pandemic. This novel is stunning.”—Emily St. John Mandel, author of The Glass Hotel and Station Eleven

“Captures the reality and valor of frontline women during a global health crisis.”—Parade

"Echoes of our current catastrophe abound -- social distancing and confusing messaging among them -- but the heroine copes with so many turn-of-the-century medical horrors that you’ll hardly remember you’re reading a pandemic novel in the first place."—Entertainment Weekly

"With an urgency that brilliantly captures the high-stakes horror and exhilaration of life on a pandemic’s front lines, the Room author centers her latest spine-tingler on a maternity ward nurse charged with keeping new mothers -- and herself -- safe."—O Magazine

"Darkly compelling, illuminated by the light of compassion and tenderness: Donoghue's best novel since Room."—Kirkus Reviews

"Donoghue offers vivid characters and a gripping portrait of a world beset by a pandemic and political uncertainty. A fascinating read in these difficult times."—Booklist

"Searing . . . Donoghue's evocation of the 1918 flu, and the valor it demands of health-care workers, will stay with readers."—Publishers Weekly

"Both urgent and eerily prescient . . . Donoghue masterfully conjures a suffocating space, this time the glorified closet where Julia helps women give birth. . . . the nonstop action of the maternity ward is so compelling."—Time