We Are Displaced: My Journey and Stories from Refugee Girls Around the World (Hardcover) 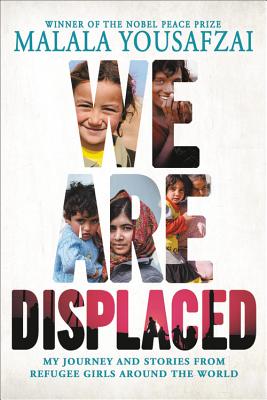 We Are Displaced: My Journey and Stories from Refugee Girls Around the World (Hardcover)


On Our Shelves Now
In this powerful book, Nobel Peace Prize winner and New York Times bestselling author Malala Yousafzai introduces the people behind the statistics and news stories about the millions of people displaced worldwide.

After her father was murdered, María escaped in the middle of the night with her mother.

Zaynab was out of school for two years as she fled war before landing in America. Her sister, Sabreen, survived a harrowing journey to Italy.

Ajida escaped horrific violence, but then found herself battling the elements to keep her family safe.

Malala's experiences visiting refugee camps caused her to reconsider her own displacement — first as an Internally Displaced Person when she was a young child in Pakistan, and then as an international activist who could travel anywhere in the world except to the home she loved. In We Are Displaced, Malala not only explores her own story, but she also shares the personal stories of some of the incredible girls she has met on her journeys — girls who have lost their community, relatives, and often the only world they've ever known.

In a time of immigration crises, war, and border conflicts, We Are Displaced is an important reminder from one of the world's most prominent young activists that every single one of the 68.5 million currently displaced is a person — often a young person — with hopes and dreams.

"A stirring and timely book." —New York Times
Malala Yousafzai is a cofounder and board member of Malala Fund. Malala began her campaign for education at age eleven, when she anonymously blogged for BBC Urdu about life under the Taliban in Pakistan's Swat Valley. Inspired by her father's activism, Malala soon began advocating publicly for girls' education, attracting international media attention and awards. At age fifteen, she was attacked by the Taliban for speaking out. Malala recovered in the United Kingdom and continued her fight for girls. In 2013, she founded Malala Fund with her father, Ziauddin. A year later, Malala received the Nobel Peace Prize in recognition of her efforts to see every girl complete twelve years of free, safe, and quality education. She is currently a student at Oxford University, pursuing a degree in philosophy, politics, and economics.
6 Best Books for Teens of 2019, Parents magazine
School Library Journal Best Books of 2019
ALA Notable Books for Children 2019
ALA Quick Picks for Reluctant Young Adult Readers 2019


Nobel Peace Prize winner Yousafzai, who famously survived being shot by Taliban soldiers as a teen in 2012, is a passionate activist for girls' right to education. Yet, in this profound volume, she sidesteps those aspects of her life to illuminate another experience: displacement - beginning with her family's forced 2009 evacuation of their Pakistani hometown in response to escalating Taliban violence. Comprising the bulk of the book are urgent, articulate first-person stories from displaced or refugee young women whom Yousafzai has encountered in her travels, whose birthplaces include Colombia, Guatemala, Syria and Yemen. ... The contributors' strength, resilience, and hope in the face of trauma is astounding, and their stories' underlying message about the heartbreaking loss of their former lives and homelands (and the resulting "tangle of emotions that comes with leaving behind everything you know") is profoundly moving.—Publishers Weekly

"A stirring and timely book that strips the political baggage from the words 'migrant' and 'refugee,' telling the deeply personal stories of displacement and disruption that were lived by Yousafzai and nine other girls. ... [In] all these accounts, hope emerges as a kind of belligerent reaction to pain and loss."—The New York Times Book Review

"While geared to mature middle and high school level listeners, this is an audiobook that could be listened to and discussed in a guided family or school setting. Anyone who wants to learn more about immigration and refugees will benefit from this telling."—School Library Journal, review of audiobook edition