The River Where Blood Is Born (Paperback) 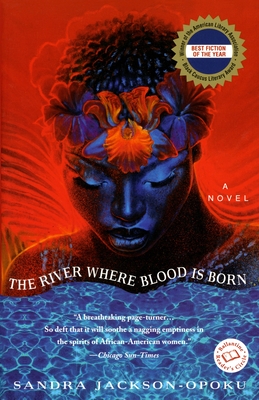 The River Where Blood Is Born (Paperback)

By Sandra Jackson-Opoku
List Price: $23.00
Our Price: $12.95
(Save: $10.05 44%)
On Our Shelves Now
This astonishing novel takes us on a journey along the river of one family's history, carving a course across two centuries and three continents, from ancient Africa into today's America. Here, through the lives of Mother Africa's many daughters, we come to understand the real meaning of roots: the captive Proud Mary, who has been savagely punished for refusing to relinquish her child to slavery; Earlene, who witnesses her father's murder at the hands of the Ku Klux Klan; Big Momma, a modern-day matriarch who can make a woman of a girl; proud and sassy Cinnamon Brown, whose wild abandon hides a bitter loss; and smart, ambitious Alma, who is torn between the love of a man and the song of her soul.

In The River Where Blood Is Born, the seen and unseen worlds are seamlessly joined--the spirit realms where the great river goddess and ancestor mothers watch over the lives of their descendants, both the living and those not yet born. Stringing beads of destiny, they work to lead one daughter back to her source. But what must Alma sacrifice to honor the River Mother's call?
Sandra Jackson-Opoku is an award-winning poet, fiction writer, screenwriter, and journalist who writes frequently on culture and travel in the African diaspora.
Excerpts from reviews of Sandra Jackson-Opoku's The River Where Blood Is Born


"Jackson-Opoku displays an intimate knowledge of African and Caribbean
culture cultures. From African tradition she creates two powerful
narrators to serve as guides. One, Kwaku Ananse, the spider, will be
familiar as the antagonist in 'trickster' tales. The other, the
Gatekeeper, welcomes the souls of mothers who cross over from life to the
Village of the Ancestors. The Gatekeeper mediates between the ancestral
mothers and the daughters they watch over. . . . In its rivers, beads,
webs and quilts, the author's story weaving is abundant. . . . The threads
of each story are as easy to follow as brightly colored stitchery. . . .
Besides its sheer literary beauty, Jackson-Opoku's story-weaving will give
readers a new spiritual dimension from which to consider the meaning of
life."

"This ambitious first novel begins like the voice of an ancient tribal
storyteller, poetic and mysterious, and we are led through an intricate
tale involving the lives of several generations of Mother Africa's
daughters. The novel combines myth and reality as it both strings the
story beads and weaves ancestral tales of various women such as Proud
Mary, a captive slave who is savagely punished for her refusal to give her
daughter up to slavery, and Alma, who is compelled to live out her destiny
by returning to the place where blood is born."

"That is the great gift of The River Where Blood Is Born. Whether
in Ghana or Chicago, Barbados or Nigeria, the resonance of these voices
rings so true that you think, 'Don't I know you?' And enmeshed in the web
of their stories we come to a perception of the divine aspect of these
women's lives, their link to the Queen Mother, The Goddess in Everywoman."

"Jackson-Opoku's first novel is an expansive tale that exquisitely melds
mythical realms together with an historical family saga spanning centuries
and continents."