END_OF_DOCUMENT_TOKEN_TO_BE_REPLACED

1968: The Year That Rocked the World (Paperback) 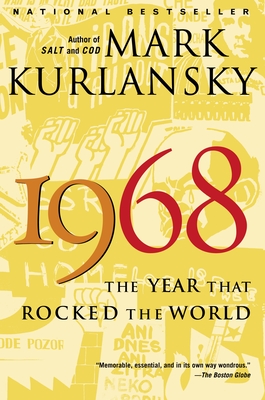 NATIONAL BESTSELLER • “In this highly opinionated and highly readable history, Kurlansky makes a case for why 1968 has lasting relevance in the United States and around the world.”—Dan Rather

To some, 1968 was the year of sex, drugs, and rock and roll. Yet it was also the year of the Martin Luther King, Jr., and Bobby Kennedy assassinations; the riots at the Democratic National Convention in Chicago; Prague Spring; the antiwar movement and the Tet Offensive; Black Power; the generation gap; avant-garde theater; the upsurge of the women’s movement; and the beginning of the end for the Soviet Union.

In this monumental book, Mark Kurlansky brings to teeming life the cultural and political history of that pivotal year, when television’s influence on global events first became apparent, and spontaneous uprisings occurred simultaneously around the world. Encompassing the diverse realms of youth and music, politics and war, economics and the media, 1968 shows how twelve volatile months transformed who we were as a people—and led us to where we are today.

Mark Kurlansky is the James A. Beard Award-winning author of the New York Times bestseller Cod: A Biography of the Fish That Changed the World; Salt: A World History; The Basque History of the World; A Chosen Few: The Resurrection of European Jewry; A Continent of Islands: Searching for the Caribbean Destiny; a collection of stories, The White Man in the Tree; and a children’s book, The Cod’s Tale; as well as the editor of Choice Cuts: A Savory Selection of Food Writing from Around the World and Throughout History. He lives in New York City.

“In this highly opinionated and highly readable history, Kurlansky makes a case for why 1968 has lasting relevance in the United States and around the world. Whether you agree or disagree with its points, you’ll find it makes for fascinating reading.”
—DAN RATHER, CBS News

Carefully researched and remarkably readable . . . Kurlansky has done a yeoman’s job of amassing an incredible amount of information and making it accessible for today’s reader. . . . What a year it was.”
–The Denver Post

Splendid . . . evocative . . . No one before Kurlansky has managed to evoke so rich a set of experiences in so many different places–and to keep the story humming.”
–Chicago Tribune

Kurlansky writes with a historian’s diligence. . . . [He] traces skillfully the astounding streams of revolt converging in that historic year. . . . A colorful, highly evocative report on the awfulness and the idealism of the time.”
–The Seattle Times

“A cornucopia of astounding events and audacious originality . . . Like a reissue of a classic album or a PBS documentary, this book is about a subject it’s hard to imagine people ever tiring of revisiting. They just don’t make years like 1968 very often.”
–The Atlanta Journal-Constitution

“1968 breathes a new life into these moments. . . . Kurlansky has a flair for bringing wit and breezy intelligence to his subjects.”
–Minneapolis Star Tribune