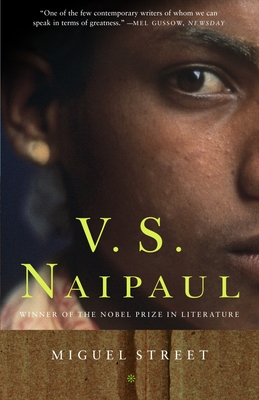 By V. S. Naipaul
List Price: $16.00
Our Price: $13.00
(Save: $3.00 19%)
On Our Shelves Now
“A stranger could drive through Miguel Street and just say ‘Slum!’ because he could see no more.” But to its residents this derelict corner of Trinidad’s capital is a complete world, where everybody is quite different from everybody else. There’s Popo the carpenter, who neglects his livelihood to build “the thing without a name.” There’s Man-man, who goes from running for public office to staging his own crucifixion, and the dreaded Big Foot, the bully with glass tear ducts. There’s the lovely Mrs. Hereira, in thrall to her monstrous husband. In this tender, funny early novel, V. S. Naipaul renders their lives (and the legends their neighbors construct around them) with Dickensian verve and Chekhovian compassion.
Set during World War II and narrated by an unnamed–but precociously observant–neighborhood boy, Miguel Street is a work of mercurial mood shifts, by turns sweetly melancholy and anarchically funny. It overflows with life on every page.
V.S. Naipaul was born in Trinidad in 1932. He came to England on a scholarship in 1950. He spent four years at University College, Oxford, and began to write, in London, in 1954. He pursued no other profession.

His novels include A House for Mr Biswas, The Mimic Men, Guerrillas, A Bend in the River, and The Enigma of Arrival. In 1971 he was awarded the Booker Prize for In a Free State. His works of nonfiction, equally acclaimed, include Among the Believers, Beyond Belief, The Masque of Africa, and a trio of books about India: An Area of Darkness, India: A Wounded Civilization and India: A Million Mutinies Now.

In 1990, V.S. Naipaul received a knighthood for services to literature; in 1993, he was the first recipient of the David Cohen British Literature Prize. He received the Nobel Prize in Literature in 2001. He lived with his wife Nadira and cat Augustus in Wiltshire, and died in 2018.
“One of the few contemporary writers of whom we can speak in terms of greatness.” –Mel Gussow, Newsday

“Miguel Street is the Bowery, the Tenderloin, and the Catfish Row of Trinidad’s Port of Spain–its citizens a loony multitude whose knavery often rises from real kinship with pathos and tragedy. . . . Naipaul is at his best in these swift caricatures of human depravity.” –San Francisco Chronicle

“Naipaul does not tell stories. By some miraculous sleight-of-hand he takes you to Port of Spain and shows you the rich, bawdy, consequential lives of the Trinidadians, as though there were no intervening veil of words. . . . I rather suspect the mantle of Chekhov has fallen on Mr. Naipaul’s shoulders.” –Robert Payne, Saturday Review