The News About the News: American Journalism in Peril (Paperback) 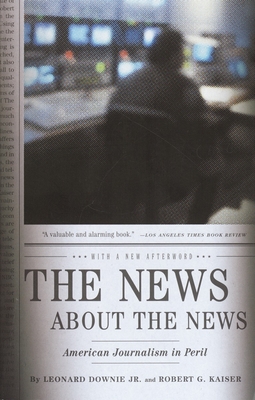 The News About the News: American Journalism in Peril (Paperback)

By Leonard Downie, Jr., Robert G. Kaiser
List Price: $16.95
Our Price: $14.00
(Save: $2.95 17%)
On Our Shelves Now
Freedom of the press is a primary American value. Good journalism builds communities, arms citizens with important information, and serves as a public watchdog for civic, national, and global issues. But what happens when the news turns its back on its public role?

Leonard Downie Jr., executive editor of The Washington Post, and Robert G. Kaiser, associate editor and senior correspondent, report on a growing crisis in American journalism. From the corporatization that leads media moguls to slash content for profit, to newsrooms that ignore global crises to report on personal entertainment, these veteran journalists chronicle an erosion of independent, relevant journalism. In the process, they make clear why incorruptible reporting is crucial to American society. Rooted in interviews and first-hand accounts, the authors take us inside the politically charged world of one of America’s powerful institutions, the media.
Leonard Downie Jr. has worked since 1964 at the Washington Post, where he has been an investigative reporter, a principal editor in the paper’s Watergate coverage, a foreign correspondent, national editor, managing editor and, since 1991, executive editor, succeeding Ben Bradlee. This is his fourth book. He lives in Washington, D.C.

Robert G. Kaiser, who joined the Post in 1963, has been a local, national and foreign correspondent, assistant managing editor for national news and managing editor. He is now associate editor and senior correspondent. This is his sixth book. He lives in Washington, D.C.
“Unsettling . . . a valuable and alarming book.” –Los Angeles Times Book Review

“A strong contribution. . . . Downie and Kaiser write from inside the tent, and they write from experience. Their views are worth our attention.” –The Miami Herald

“Unsettling. . . . The News About the News has a message worth reading.” –St. Louis Post-Dispatch

“We needed something persuasively powerful. Here it is. . . . [This book] makes the case that news is essential, that the quality of news has been in decline and that letting it go on declining is not just bad journalism but bad business. I wish I'd written it.” –James M. Naughton, American Journalism Review

“Downie and Kaiser are not campus alarmists, but serious men who do not kid around. . . . A thorough piece of reporting in the upright plain-but-honest tradition.” –Russell Baker, The New York Review of Books

“A vividly written account of what is indeed American journalism in peril. It will grip anyone who reads a paper regularly and watches television.” –The Times Literary Supplement

“An insightful and penetrating look at how journalism has changed for the better and worse.” –Booklist

“Refreshing and educational. . . . Any reader who cares about the quality of information available to the American citizenry is bound to learn something new, and probably unforgettable, from this insiders’ account.” –BookPage

“An insightful and authoritative look at how corporate financial demands have consistently eroded newsroom budgets with a corresponding cutback in the coverage of the news.” –The Sacramento Bee

“Brief yet meaningful. . . . An important, up-to-date study that should be required reading for . . . serious consumers of the news.” –Publishers Weekly