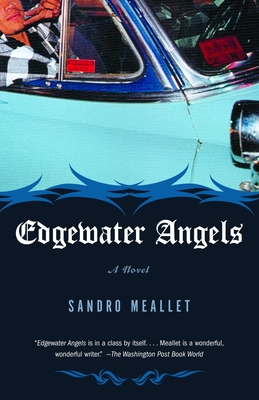 By Sandro Meallet
List Price: $17.00
Our Price: $13.00
(Save: $4.00 24%)
On Our Shelves Now
Set in the projects of Los Angeles, California, Edgewater Angels chronicles the adolescence of Sunny Toomer, a streetwise young man endlessly sandwiched between the right and wrong thing to do. In a neighborhood where an absentminded stare might be mistaken for a silent challenge for turf, and asking someone if they have a problem may cost you your life, Sunny ekes out survival amidst an incomparable cast of characters, including a husbandless mother, violence-prone uncles, and a cadre of strangely endearing men either headed for jail or out on parole. Written in original riff-like prose, Meallet gives us a unique story that is serious yet playful, daring in aim, and absolutely captivating.
SANDRO MEALLET grew up in the projects of San Pedro, California, attended the University of California, Santa Cruz, on a basketball scholarship, and earned an MFA from The New School for Social Research and an MFA from Johns Hopkins University. He lives in California.
“Edgewater Angels is in a class by itself. . . . Meallet is a wonderful, wonderful writer.” –The Washington Post Book World

“Every now and then a good book comes from a place you might not expect. . . . This time that community is San Pedro, and the good book is Edgewater Angels.” —San Francisco Chronicle

“A beguiling coming of age story . . . [that] in its comic point of view, plot twists, and moral vision . . . reads like an unabashed descendant of Huck Finn with a bit of David Lynch’s passion . . . thrown in.” –The Village Voice

“An exuberantly absurdist look at growing up poor and shrouded by violence. . . . Meallet takes the most ominous event as an opportunity for black comedy, and finds true manhood in the least macho of behaviors.” –The New York Times Book Review