The Coffee Trader: A Novel (Paperback) 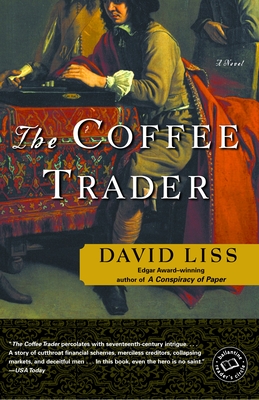 The Coffee Trader: A Novel (Paperback)

By David Liss
List Price: $17.00
Our Price: $16.00
(Save: $1.00 6%)
On Our Shelves Now
Amsterdam, 1659: On the world’s first commodities exchange, fortunes are won and lost in an instant. Miguel Lienzo, a sharp-witted trader in the city’s close-knit community of Portuguese Jews, knows this only too well. Once among the city’s most envied merchants, Miguel has suddenly lost everything. Now, impoverished and humiliated, living in his younger brother’s canal-flooded basement, Miguel must find a way to restore his wealth and reputation.

Miguel enters into a partnership with a seductive Dutchwoman who offers him one last chance at success—a daring plot to corner the market of an astonishing new commodity called “coffee.” To succeed, Miguel must risk everything he values and face a powerful enemy who will stop at nothing to see him ruined. Miguel will learn that among Amsterdam’s ruthless businessmen, betrayal lurks everywhere, and even friends hide secret agendas.
David Liss is the author of The Day of Atonement, The Twelfth Enchantment, The Devil’s Company, The Whiskey Rebels, The Ethical Assassin, A Spectacle of Corruption, The Coffee Trader, andA Conspiracy of Paper, winner of the Edgar Award for Best First Novel. He lives in San Antonio with his wife and children.
“AN ENTERTAINING TALE . . . [A] LEARNED PAGE-TURNER . . . Despite the many characters and plot twists, Mr. Liss keeps his story in graceful motion.”
—The Wall Street Journal

“EXPERTLY PLOTTED AND EXCELLENTLY WRITTEN, and it has all the qualities readers want in novels—romance, mystery, suspense, betrayal and redemption, a feeling for how people lived in other times and places.”
—The Plain Dealer (Cleveland)

“UNUSUAL AND DIVERTING . . . Sometimes, as the book demonstrates with a nice twist, sincerity can be the greatest means of deception.”
—The New York Times Book Review

“[A] TRANSPORTING TALE OF FINANCIAL INTRIGUE . . . [Liss’s] writing is smooth and elegant—like a good cup of coffee.”
—The Boston Globe

“Liss fashions a wide-ranging, labyrinthine plot. . . . He also has a historian’s eye for detail, and he creates an Amsterdam that feels very much of its time. . . . Liss’s novels are ultimately about a central truth of capitalism, which is that the system is bigger and more powerful than anyone within it. . . . The best moments of The Coffee Trader create a powerful sense of vertigo that’s something like the vertigo of finance capitalism.”
—The Washington Post Book World

“David Liss has cornered a very narrow niche of the literary market—historical financial thrillers. And it must be said: He’s quite good at it. . . . Lienzo’s world comes to life in great (and frequently grimy) detail, and the workings of the Amsterdam bourse are eerily similar to modern commodities markets. . . . [The book is] more latte than espresso, and all the more enjoyable as a result.”
—San Francisco Chronicle

“The Coffee Trader is a very fine piece of historical fiction, and also a uniquely resonant one. . . . David Liss makes the foreign familiar as he immerses the reader in a bustling and intrigue-ridden past.”
—The Denver Post

“A DOUBLE SHOT OF PROSE SPICED WITH CHARACTERS AND COMMODITIES
AS ERRATIC AS THE DRINK ITSELF. . . .The Coffee Trader paints an evocative picture of Dutch life in the 1600s. Miguel Lienzo’s thrilling flim-flam schemes in coffee bean speculation and Liss’s insightful commentary on paper-tiger consortiums are rendered real and relevant. . . . Throughout Trader, Miguel remains a befuddling and charming rogue.”
—Austin American-Statesman

“Good to the last drop . . . Chock full of intrigue, suspense, and financial shenanigans . . . Liss transports the reader back in time . . . handl[ing] the seventeenth century and all the nuances of Dutch culture with utter ease. Whether it’s his portrayal of the Ma’amad, the restrictive governing body of Miguel’s Jewish community, or the complex characters appearing throughout the novel, The Coffee Trader is an excellent example of historical fiction in its finest form.”
—The MetroWest Daily News

“The premise and setting of The Coffee Trader is unique, with smaller-scale historical detail as richly rewarding as Liss’s remarkable first work, A Conspiracy of Paper.”
—The San Diego Union-Tribune

“Each player in this complex thriller has a hidden agenda, and the twists and turns accelerate as motives gradually become clear.”
—Publishers Weekly (starred review)

“A NOVEL OVERFLOWING WITH INTRIGUE AND DUPLICITY . . .Once you’ve wandered the back alleys of Amsterdam with David Liss, you’ll never look at your morning cup of coffee the same way again!”
—SHERI HOLMAN
Author of The Dress Lodger
and The Mammoth Cheese

“In his second novel, David Liss creates his own genre: the historical noir. The seventeenth-century Amsterdam he depicts is a wonderfully dark city of secrets, roiling with deceitful maneuverings and caffeine-fueled perils. The Coffee Trader is vivid, utterly absorbing, and more than a little relevant to our current age of financial skulduggery.”
—GARY KRIST
Author of Extravagance

“The Coffee Trader is riveting as a historical re-creation, compelling as a tale, and relevant both about the morality of community—in this case, Jewish community—and about the ethical corruptions of an economy where value is a function of perception, competition, and, above all, manipulation.”
—NEIL GORDON
Author of Sacrifice of Isaac and Sea of Green

“Liss provides plenty of unexpected twists and turns to keep the reader’s attention glued to the page.”
—Book Street USA