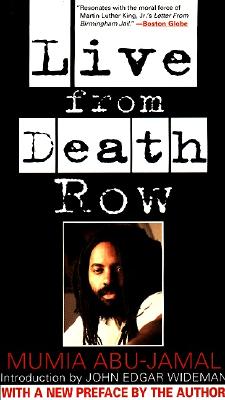 "A rare and courageous voice speaking from a place we fear to know: Mumia Abu-Jamal must be heard." —Alice Walker

After twenty years on death row, Mumia Abu-Jamal was released from his death sentence . . . but not the conviction. This once prominent radio reporter was convicted for the murder of Philadelphia police officer Daniel Faulkner in 1982, after a trial many have criticized as profoundly biased. Live from Death Row is a collection of his prison writings—an impassioned yet unflinching account of the brutalities and humiliations of prison life, and a scathing indictment of racism and political bias in the American judicial system.

Before his conviction, Mumia Abu-Jamal covered community development and culture as a radio reporter in Philadelphia and was president of the Philadelphia Association of Black Journalists. Once a Black Panther, his writings have been published in The Nation and The Yale Law Review. He is the author of the books All Things Considered, Death Blossoms, and Faith of Our Fathers. In August 1995 he was granted a stay of execution, and his appeal for a new trial is currently pending.

"A rare and courageous voice speaking from a place we fear to know: Mumia Abu-Jamal must be heard." — Alice Walker

"An important book [that] takes us into the bowels of hell...Abu-Jamal offers expert and well-reasoned commentary on the justice system...His writings are dangerous." — Village Voice

"Brilliant in its specificity and imperative, Mumia Abu-Jamal's work is about why multitudes of people don't overcome. It rings so true because he has not overcome." — LA Weekly

"We aren't supposed to feel connected with people 'inside'—least of all those on Death Row. Mumia Abu-Jamal's eloquent, scholarly, urgent dispatches teach us that we ignore those connections at our own peril." — Adrienne Rich

"Abu-Jamal is an articulate voice at the far side of this country's great racial divide. . . . In this decade when building prisons and increasing the use of the death penalty have become popular responses to crime, Abu-Jamal's perspective is worth reading." — Philadelphia Inquirer

"A scathing indictment of this country's justice system from a man about to receive it's ultimate punishment. . . . He has become one of America's most controversial and eloquent death row prisoners." — New York Daily News

"Documents the maddening psychological and physical torment of a life awaiting execution inside Huntingdon County Prison. . . . His words shock in a raw, disturbing style." — Boston Globe