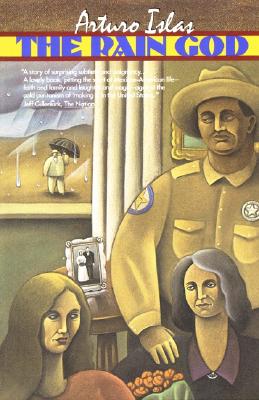 "The Rain God is a lost masterpiece that helped launch a legion of writers. Its return, in times like these, is a plot twist that perhaps only Arturo Islas himself could have conjured. May it win many new readers." — Luis Alberto Urrea, bestselling author of The House of Broken Angels and The Hummingbird’s Daughter

"Rivers, rivulets, fountains and waters flow, but never return to their joyful beginnings; anxiously they hasten on to the vast realms of the Rain God."

A beloved Southwestern classic—as beautiful, subtle and profound as the desert itself—Arturo Islas's The Rain God is a breathtaking masterwork of contemporary literature.

Set in a fictional small town on the Texas-Mexico border, it tells the funny, sad and quietly outrageous saga of the children and grandchildren of Mama Chona the indomitable matriarch of the Angel clan who fled the bullets and blood of the 1911 revolution for a gringo land of promise. In bold creative strokes, Islas paints on unforgettable family portrait of souls haunted by ghosts and madness--sinners torn by loves, lusts and dangerous desires. From gentle hearts plagued by violence and epic delusions to a child who con foretell the coming of rain in the sweet scent of angels, here is a rich and poignant tale of outcasts struggling to live and die with dignity . . . and to hold onto their past while embracing an unsteady future.

The late Arturo Islas was our most acclaimed and accomplishedliterary explorer of Mexican-American culture. The publication of his first novel, The Rain God, marked the arrival of a new and unique voicethat could speak to both traditions.

Born in 1938 in El Paso, Texas, Islas grew up in the same desertcountry along the Mexican-American border that is the home of theAngel family in his novels. He earned his undergraduate, graduate anddoctoral degrees from Stanford University, where he continued as aprofessor of English. He was a member of Phi Beta Kappa, a WoodrowWilson Fellow and a University Fellow, as well as a recipient of theLloyd W. Dinkelspeil Award for outstanding service to undergraduateeducation at Stanford. One of Islas' most popular courses was alimited enrollment seminar, called "American Lives," that mixed readingsin literary autobiography with students' own attempts to chronicleimportant aspects of their lives.

He wrote Migrant Souls, the companion novel to The Rain God, a year before he died at home in Stanford in early 1991. He wasat work on a third novel.