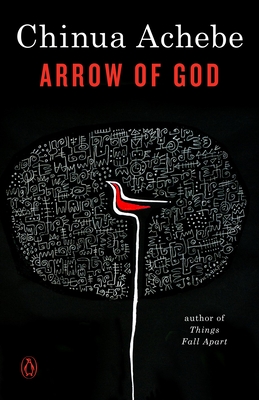 “A magical writer—one of the greatest of the twentieth century.” —Margaret Atwood

“African literature is incomplete and unthinkable without the works of Chinua Achebe.” —Toni Morrison

When Things Fall Apart ends, colonial rule has been introduced to Umuofia, and the character of the nation, its values, freedoms, religious and socio-political foundations have substantially and irrevocably been altered. Arrow of God, the second novel in Chinua Achebe’s The African Trilogy, moves the historical narrative forward. This time, the action revolves around Ezeulu, the headstrong chief priest of the god Ulu, which is worshipped by the six villages of Umuaro. The novel is a meditation on the nature, uses, and responsibility of power and leadership. Ezeulu finds that his authority is increasingly under threat from rivals within his nation and functionaries of the newly established British colonial government. Yet he sees himself as untouchable. He is forced, with tragic consequences, to reconcile conflicting impulses in his own nature—a need to serve the protecting deity of his Umuaro people; a desire to retain control over their religious observances; and a need to gain increased personal power by pushing his authority to the limits. He ultimately fails as he leads his people to their own destruction, and consequently, his personal tragedy arises. Arrow of God is an unforgettable portrayal of the loss of faith, and the downfall of a man in a society forever altered by colonialism.
Chinua Achebe (1930–2013) was born in Nigeria. Widely considered to be the father of modern African literature, he is best known for his masterful African Trilogy, consisting of Things Fall Apart, Arrow of God, and No Longer at Ease. The trilogy tells the story of a single Nigerian community over three generations from first colonial contact to urban migration and the breakdown of traditional cultures. He is also the author of Anthills of the Savannah, A Man of the People, Girls at War and Other Stories, Home and Exile, Hopes and Impediments, Collected Poems, The Education of a British-Protected Child, Chike and the River, and There Was a Country. He was the David and Marianna Fisher University Professor and Professor of Africana Studies at Brown University and, for more than fifteen years, was the Charles P. Stevenson Jr. Professor of Languages and Literature at Bard College. Achebe was the recipient of the Nigerian National Merit Award, Nigeria’s highest award for intellectual achievement. In 2007, Achebe was awarded the Man Booker International Prize for lifetime achievement.
"My favorite novel." —Chimamanda Ngozi Adichie

“A magical writer—one of the greatest of the twentieth century.” —Margaret Atwood

“African literature is incomplete and unthinkable without the works of Chinua Achebe.” —Toni Morrison

“Chinua Achebe is gloriously gifted with the magic of an ebullient, generous, great talent.” —Nadine Gordimer

“Achebe’s influence should go on and on . . . teaching and reminding that all humankind is one.” —The Nation

“The father of African literature in the English language and undoubtedly one of the most important writers of the second half of the twentieth century.” —Caryl Phillips, The Observer

“We are indebted to Achebe for reminding us that art has social and moral dimension—a truth often obscured.” —Chicago Tribune

“He is one of the few writers of our time who has touched us with a code of values that will never be ironic.” —Michael Ondaatje

“For so many readers around the world, it is Chinua Achebe who opened up the magic casements of African fiction.” —Kwame Anthony Appiah

“Achebe is one of the most distinguished artists to emerge from the West African cultural renaissance of the post-war world.” —The Sunday Times (London)

“[Achebe is] a powerful voice for cultural decolonization.” —The Village Voice

“Chinua Achebe has shown that a mind that observes clearly but feels deeply enough to afford laughter may be more wise than all the politicians and journalists.” —Time

“The power and majesty of Chinua Achebe’s work has, literally, opened the world to generations of readers. He is an ambassador of art, and a profound recorder of the human condition.” —Michael Dorris