Children of the Alley: A Novel (Paperback) 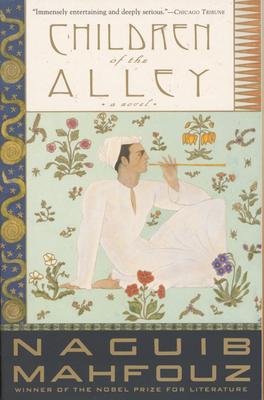 Children of the Alley: A Novel (Paperback)


On Our Shelves Now
The tumultuous alley of this rich and intricate novel (first published in Arabic in 1959) is inhabited by a delightful Egyptian family, but is also the setting for a second, hidden, and more daring narrative: the spiritual history of humankind. The men and women of a modern Cairo neighborood unwittingly reenact the lives of their holy ancestors: from the feudal lord who disowns one son for diabolical pride and puts another to the test, to the savior of a succeeding generation who frees his people from bondage. This powerful novel confirms again the richness and variety of Mahfouz's storytelling and his status as "the single most important writer in modern Arabic literature" (Newsweek).

Naguib Mahfouz was born in Cairo in 1911 and began writing when he was seventeen. His nearly forty novels and hundreds of short stories range from re-imaginings of ancient myths to subtle commentaries on contemporary Egyptian politics and culture. Of his many works, most famous is The Cairo Trilogy, consisting of Palace Walk (1956), Palace of Desire (1957), and Sugar Street (1957), which focuses on a Cairo family through three generations, from 1917 until 1952. In 1988, he was the first writer in Arabic to be awarded the Nobel Prize in Literature. He died in August 2006.

"An ambitious fable that attempts to embrace within its pages not merely the world of the Middle East but that of the world itself." --Washington Post Book World